I stumbled across a blog entry from Clare Byam Cook discussing low milk supply today,  it's the sort of piece that appears to make logical sense - but I wanted to examine things in a bit more detail... 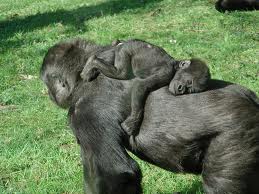 The article opens with a reference to a Daily Mail article about a Gorilla that nearly died as the quality of his mother's milk wasn't good enough -  the proof that nature doesn't always get it right.

Clare goes on to say:


"Most mothers are told that their breasts will always supply the amount of milk their baby needs, providing they are eating a healthy diet and feeding on demand, but every week I see mothers who have not found this to be the case. In many cases, their baby has lost more than 10% of his birth-weight and/or is still not back to his birth-weight after several weeks of following the standard advice of endless feeding, skin-to-skin contact etc. These mothers always find it reassuring when I point out to them that they are not a failure and that many other mothers have similar problems...... and so do animals!"

What seems obvious to me at first glance, is that this gorilla nearly dying due to the quality of his mother's milk made the news (albeit the Daily Mail) - doesn't that tell us this isn't an every day occurrence?   That in fact it's an exceptional situation?  It's fair to say I think, that many gorillas will feed their babies and they will grow just fine, hence why this case is news worthy?  We also have no background to this story - whether there were health issues with the mother for example.

I do absolutely agree with Clare that I also see babies week in and week out who are struggling.  Babies who have lost more than 10% of their birth-weight and/or are still not back to his birth-weight after several weeks of following the standard advice of endless feeding, skin-to-skin contact etc.  I like to call this "passive breastfeeding support".

I would even go as far as to say a fair amount of the mums I see whose babies are still in this position after a few weeks, do also have genuine milk supply issues.  However (and this is key) the vast majority of mums who do have a supply issue didn't start out with one - it's not some blip of nature but a natural, logical (albeit undesirable) progression of events that has occured.  One that makes perfect sense if you understand the science behind lactation.

Clare says that whilst most women are told breasts will make enough milk, she sees lots of cases where this isn't true. Consider the breastfeeding rates at 4 or 6 months in the UK - they're tiny. So does this mean most mothers are "broken"? That nature doesn't have a blip and get it wrong, but rarely gets it right?

Firstly it's worth remembering that something Clare and I do share in common is that we both work in private practice.  And something I've become painfully aware of is that we often only see the women who have problems severe enough (and with the funds and desire to) call in the paid support.  I've felt very conscious of the need to remind myself that women who aren't having problems don't call us up just to tell us they have a fantastic milk supply!  Our exposure is very one sided.

However - as I said above. I do see babies that are clearly struggling to obtain enough calories, mothers who have real tangible milk supply issues - the question I think is WHY?

Of course some mothers suffer genuine issues producing milk; reasons for this include issues such as mammary hypoplasia (insufficient glandular tissue),  thyroid problems or some hormone conditions.  But, these are the more unusual cases, not the majority of mums I see.

Birth can also impact, it is the placenta coming away that triggers the start of milk production - therefore if mum has fragments of retained placenta, this can cause milk to not "come in" fully.  Extreme blood loss such as in the case of a postpartum haemorrhage, another known factor..

Yet the vast majority of mums I see didn't start out with a milk supply problem.

So why are the babies not gaining weight and settling as expected? And how are mums ending up with milk supply issues?

In my experience there are two main reasons aside from those mentioned above, that a mum finds herself with supply problems.

1.  The baby simply doesn't transfer milk well
The mum can have enough milk to feed quads, but if the baby can't for whatever reason get that milk out of the breast well, it matters not  The older the baby becomes and the more his need for nutrition grows, the more the problem is exacerbated.

These infants often drink the initial milk ejection (letdown) and then the young baby typically falls asleep.  They're not full however - if you were to try and put this baby down they would cry and display hunger cues.  Some feed for hours or feeds roll together back to back - stunted with "power snoozes".

After this point things change.


It is the removal of milk that signals to the body to make more, and how much to make.  In the very early days it often makes more than is required, which is why mum may feel very full and leak - but it's important to note not all mums will wake up like Dolly Parton, yet have a perfectly adequate supply.  Over the coming days and weeks, mum's body begins to establish how much is required to nourish her baby/babies.  When her breasts are full, this tells her body to slow down and eventually cease milk production (if no further milk is removed)  When milk is effectively removed - this tells her body it was needed and to make more.  The more frequently and effectively this happens, the faster her body responds.

Now lets consider what happens to a a mum whose milk "comes in" as expected, but then her baby only removes small amounts of milk, resulting in the poor weight gain Clare describes.

Yup, the infrequent, inadequate removal prompts her supply to reduce.

By the time baby is several weeks old, supply may have reduced enough that there can be a problem - but this wasn't the initial cause.

Being able to identify effective milk transfer, not just basing things on "latch" is key.  Otherwise the mum may take steps to increase her supply, perhaps via pumping or herbal supplements (because increased feeding of the baby isn't going to do it if he isn't feeding well) - before feeding the expressed milk to baby.  Yet if the transfer issue isn't addressed, as soon as the expressing and supplementing stops - the original problem may once again rear its head!

So - if baby isn't transferring well, the next question is surely how can this be resolved?   Not just dealing with the presenting symptoms ie low supply and poor gain.

2.  The second reason I see for the scenario Clare describes is quite simply insufficient feeding.

It's interesting Clare uses the analogy of gorillas, as our closest genetic match this certainly seems the most logical choice when examining feeding.  Gorillas feed frequently as babies, are carried often and "nest share" until breastfeeding ceases.

This is significant when exploring how often a human infant should feed. 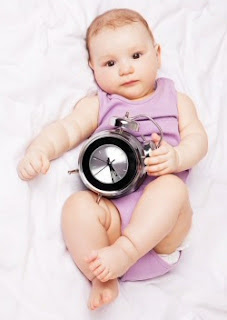 Yet - often mothers are told they must space their baby's feeds 3-4 hourly, on a schedule not responding to their cues.  The result for some mothers if this isn't their infant's natural pattern, is the breasts become fuller, and as we examined above supply can reduce.  Whilst some mums will continue to produce enough milk; others will struggle..

Similarly. some babies will manage to take adequate nutrition despite reduced feeding, others wont.

As discussed in this earlier blog post - when the breast is fuller, the initial milk released is lower in fat - add a baby that falls asleep quickly into the mix and the problem compounds.  When a baby feeds more frequently and feeds well (which ultimately is the key), fattier milk is available earlier into the feed.

What it's also worth noting is that if you have a baby as described in point one, who is not transferring milk brilliantly - restricting feeds may initially appear to improve the problem.   The breasts become fuller and there is more milk available with the initial milk ejection reflex.  However - the breasts as we know will adjust to this fullness by reducing production, and the original problem may simply reoccur if the cause of why the baby was struggling to transfer milk well isn't addressed.

Ultimately, I think preventing the situation Clare describes is the aim - to avoid it happening in the first place.

Mothers who receive adequate antenatal education rarely find themselves in this situation.  They know how they can tell if their baby is taking enough, and how to identify early signs there may be a problem.  They have realistic expectations and know they can call someone if they're unsure.

There is also little excuse for mum's healthcare provider not picking up there is a problem, and advising mum appropriately - babies don't just not gain weight, they have lots of other signs and indicators if intake is insufficient, and standard protocols that should be discussed with parents if this is the case.

Until we start supporting mums appropriately - too many are going to think they just couldn't breastfeed, and for me that really isn't good enough.