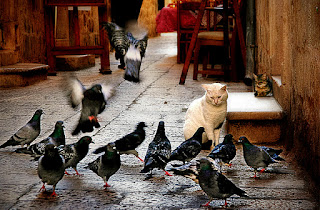 The UK "tongue tie world" was thrown into chaos just before Christmas, when the Association of Tongue Tie Practitioners (ATP) sent an email to all their members in private practice.

They reported that confusion had arisen over whether the Care Quality Commission (CQC - regulators of health and social care in England), considered tongue tie a surgical procedure that required CQC registration.

The ATP states that in both 2011 and 2013, the CQC had reassured them registration wasn't required. However recently, they've received reports that practitioners who contacted the CQC independently, have been advised it’s up to them to establish whether they need to register using the framework published.

Further communications between at ATP and CQC, have so far not resulted in obtaining the blanket guidance for all practitioners that the ATP seek. 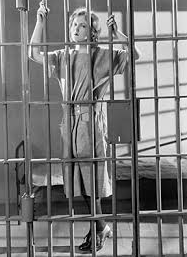 As a result the ATP sought legal advice. Whilst this was under investigation over Christmas, the ATP warned if practitioners were not registered, yet it turned out they needed to be - they could face a hefty fine and even prison.

The ATP of course would be neglectful not to share the legal information gleaned with their members. Since they formally provide guidance regarding registration, they're quite rightly likely to be concerned about potential litigation issues that could arise as a result of any advice they give. They recommended this course of action for all healthcare practitioners that were not CQC registered.

Since it may take months for applications to the CQC to be processed, they also provided a suggested letter members could use to inform others why their frenulotomy services had temporarily ceased.

This information was disseminated to members, some of whom ceased practice.

As updated guidance from the CQC has been published since 2013, this could mean, as the ATP highlighted in their email, that a good chunk of practitioners have potentially been misadvised - resulting in them practicing without the appropriate registration for years. Concern was also raised the CQC could take retrospective legal action if and when members applied.

I've heard all sorts of rumours over the last couple of weeks - that the ATP had forced suspension of services, that the government?! had decided nobody was regulating frenulotomy and so had banned private practice, through to claims anyone practicing without CQC registration was acting illegally!

Clearly some forgot that all healthcare providers with a pin are already really rather regulated - so unless your friend's non-registered uncle is having a bash down the pub, we were always far from the worryingly unsafe situation some are now suddenly purporting.

Who are the ATP?

We should clarify as there has been some confusion recently online, the ATP is not a governing body or regulatory in nature. The ATP was formed by a group of tongue tie practitioners and is a committee run, member organisation. They're perhaps best known for the UK directory, or list of their members who provide tongue tie services - although their scope is larger than this as they state they aim to increase tongue tie awareness, support parents to obtain safe, effective care and so on.  All practitioner members of the ATP must submit evidence of training and insurance.

Tongue tie providers can therefore choose to become a member, but there is no requirement to do so.  Similarly of course, both members and non-members can choose to follow guidance from the ATP, or seek their own legal counsel.

Several providers I know (including ours), had already made contact with the CQC independently, typically when setting up their practice or moving to a clinic base. All seem to have been advised (as per recent reports), that the onus was on them to read the guidance and establish whether registration was required.

Because the framework is complex and different exemption pathways exist, for example here and here (with further details and caveats in other sections and sub-sections), some providers have already separately sought legal advice long before this recent news from the ATP.

Some practitioners have already faced investigation and answered to the CQC.

I was notified early in 2018 that IFS (Milk Matters) were under investigation for unlawfully undertaking "Treatment of disease, disorder or injury" and "Surgical Procedure".

We probably shouldn't have been surprised as after I made THIS Facebook post here, I received this (ironically a year ago to the day!): 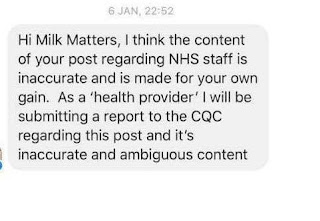 After providing all the required information/evidence about our setup, practitioner and so on (including offering to register ASAP if required) - the complaint was dismissed with no further action needed.

Our legal guidance received since the ATP email therefore, is that we have already satisfactorily addressed this issue direct with the CQC.

The latest legal advice the ATP shared with members, in response to some continuing to practice, can be found in the form of an email from their barrister:

"I am afraid it (frenulotomy) is registerable as far as independent practitioners are concerned and an offence to carry it out without registration (subject to the medical practitioner exemption, explained in the advice)."[sic]

Their opinion is frenulotomy is registrable and if you don't meet the required exemptions, to not do so would be an offence.  Logical.  This however is not the same as saying all providers need to register.

It also makes the next move by the ATP yesterday incredibly confusing. 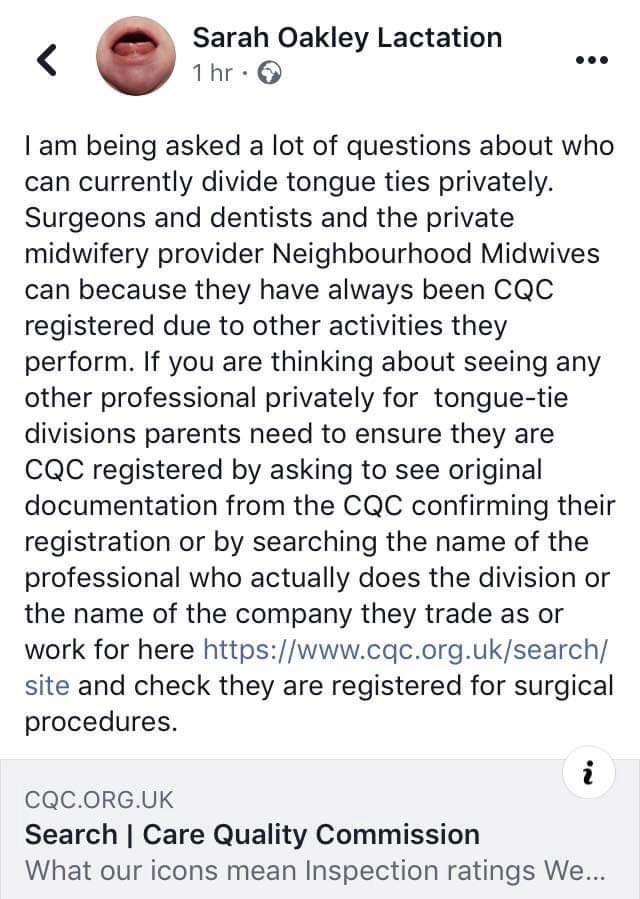 Why, I wonder, do parents need to ensure a provider is CQC registered?

The onus is not on patients to ensure their healthcare professional holds appropriate CQC registration, because they can't be expected to be aware of exemptions or the laws surrounding registration.  Despite what has been suggested recently - parents visiting a non-registered CQC provider are NOT "colluding in an illegal act".  Providers who fail to register when they need to however, can face prosecution.

What are the benefits of using a practitioner that is CQC registered rather than exempt from needing to register?

The ATP may need to expand further and provide evidence supporting their rationale, should they be challenged legally regarding this recommendation. I can't imagine paying members (who have been advised by their own solicitor they are exempt from needing to register) will be massively impressed at this point.

It's even harder to understand the recommendations in terms of benefits to parents, as this leaves us for the most part with surgeons and dentists - the very group from which parents on the UK Infant Tongue Tie Group report the lowest satisfaction levels, when it comes to frenulotomy and infant feeding.

More about the CQC

Given what I've read in recent days, I think there is much confusion about what the CQC actually does - Here you can see what CQC fundamental standards are.

Despite what many seem to think, the CQC won't undertake complaints from those dissatisfied with their private care (as outlined here).

"We cannot make these complaints for you or take them up on your behalf. That may seem confusing but it’s because we don’t have powers to investigate or resolve them."

The CQC inspect and ensure the provider is qualified, that general clinical standards are met and so on, but should someone be unhappy with a treatment received - whether CQC registered or not, complaints would be addressed to the relevant governing body eg the General Medical Council, Nursing and Midwifery Council or General Dental Council.

One might argue - why doesn't everyone just register with the CQC anyway, even if they don't need to, surely this is win win all round?

The problem with this is the vast majority of tongue tie providers work alone or with a colleague - yet the CQC is setup to regulate large hospitals, care homes and suchlike.

If a provider has 2 bases (working say half a day from each), the annual cost for registration to the CQC is in the region of £4000.

In addition to this, sources quote anywhere between forty and hundreds of staff hours are needed to apply for and prepare for an inspection (rather like when Ofsted at inspecting schools).  If we pitch that even at forty hours (which would likely be unrealistically low for someone with no experience of the process), that's around a further £2500.

If we then consider the insurance to undertake tongue tie independently is already expensive (as you might imagine), plus other "hidden costs" like accountancy fees, ongoing CPD hours to keep up to date with current practice, conferences and re-certification costs for IBCLCs and so on) - many may soon find it's not financially viable to practice.

It would also be very difficult to argue any benefits in terms of safety, of everyone blindly registering with the CQC even if they're eligible for exemption.

Frenulotomy has been performed extensively in the UK since the 1990s and is considered an extremely safe procedure which can be performed in the home (like a heel prick/neonatal blood-spot or blood test) - complications are considered very rare (NICE: Division of ankyloglossia (tongue-tie) for breastfeeding).

Independent nurses and private health visitors in any great number are relatively new in terms of private UK services, from the perspective of member interests - an urgent dialogue regarding clarifying current and possible further exemptions with the CQC would seem prudent before issuing guidance.

Assistance for different types of provider in navigating the exemptions seems necessary - yet instead we're seeing recommendation every private practitioner in the UK should race to register or be deemed "legally unsafe" and avoided by parents.

This seems both reactionary and unnecessary to many I've discussed this with, leaving both practitioners and parents stuck.  One health professional I spoke with who is CQC registered for other activities, said they'd expect practitioners to explore all routes thoroughly for CQC exemption, offering yourself up for regulation unnecessarily they felt was madness.  Whilst unfortunately nobody was prepared to speak "on the record", this is clearly a large can of worms lacking a lid.
Posted by Analytical Armadillo IBCLC No comments: