A Gain is Not a Gain. Faltering Growth in Breast & Formula Fed Babies.

We've been running our weekly infant feeding clinic in Yorkshire for years now, and during that time it's been fascinating to note the changing trends when it comes to feeding babies.


When we first started, a common problem was parents were advised their baby needed additional milk when they didn't.  This happened because their growth was plotted on charts based on the growth patterns of formula fed babies, resulting in the breastfed babies older than a few months, appearing not to grow adequately.  We spent so much time reassuring parents that their babies were growing perfectly well for a breastfed baby and didn't need coaxing to take additional milk.

Thus historically on the old charts, many breastfed babies appeared to have suboptimal gain and as a result the UK growth charts were updated to reflect the typical growth patterns of those exclusively breastfeeding.

In our clinic in the last couple of years, things have definitely shifted.  Now it's rare we see an over-supplemented baby, instead we've observed a steep increase in actual cases of "faltering growth" - that is babies who aren't a little underweight, but chronically so. 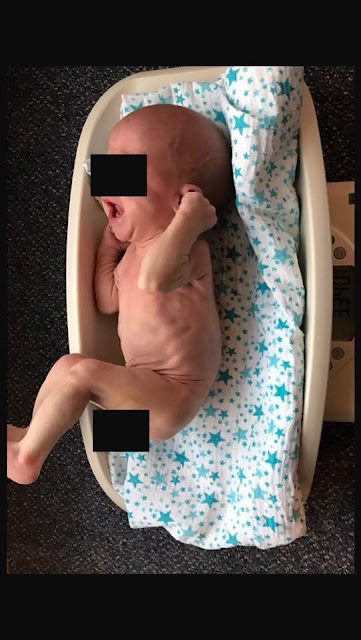 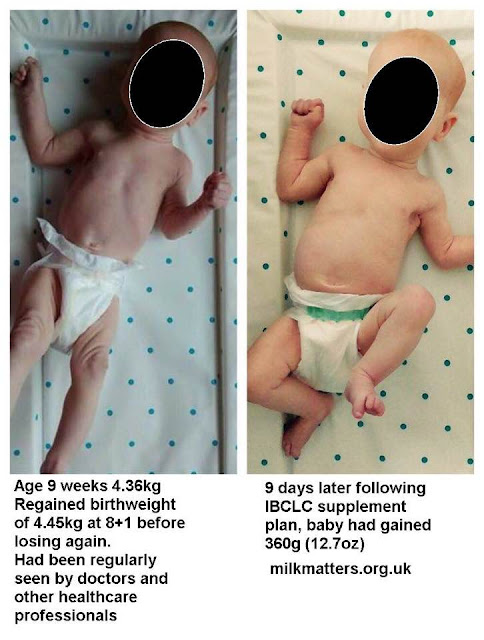 What's perhaps most surprising is both these babies above were under the care of and regularly seen by healthcare professionals.

In the case of the first baby, they were eventually referred to a paediatrician.  I completed a new growth chart for them to take, so weight trend was clearly visible.  Baby had a tongue tie and we can see when the supplement plan was initiated at 7 weeks.  Mum however was reluctant to give extra milk as her group online had warned her it would impact her supply (untrue, a baby not transferring milk will do that) and that anyone suggesting formula wasn't truly supportive of breastfeeding.  This meant additional milk was given (provoking gain), withdrawn (resulting in the same amount gained lost again) and re-introduced again - creating the static pattern at the end. 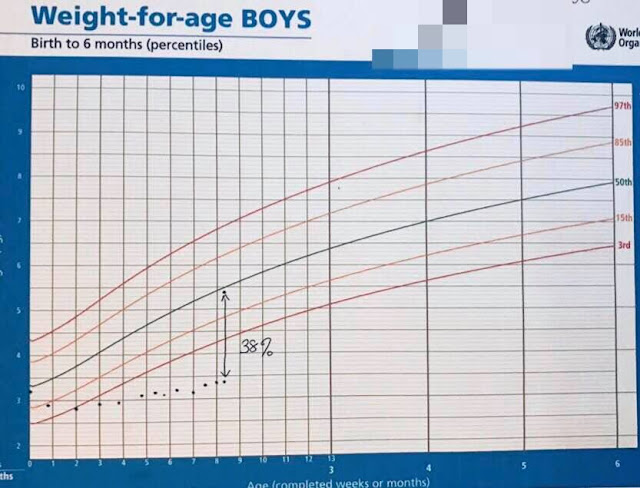 Note the growth trend - how far away from that bottom curve are the dots (the minimum typically expected weight) and we can see there's a consistent pattern of faltering growth resulting in a 38% deficit based on expected weight.

It was a cold winter's day when they attended their paediatric review and baby was dressed in a fleece snowsuit.  The paediatrician didn't feel it necessary to undress the baby, instead they unzipped the suit enough to listen to baby's chest with a stethoscope.  They asked if  he was peeing and pooping and said they weren't concerned about weight as we had plotted the chart wrong....

They said that although baby was 38 weeks when born and a typical weight of over 7lb, they felt a premature chart should be used (designed for babies born before 37 weeks and of a lower weight), and so adjusted the baby's chart in his red book notes to reflect this: 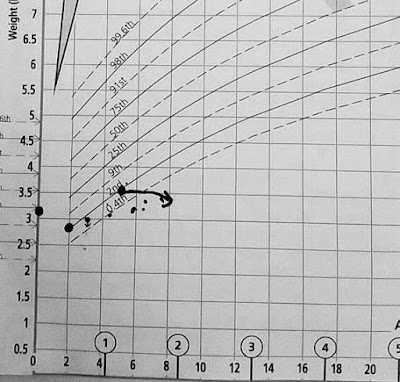 The bold dot and arrow indicate where the consultant felt the dot should be with this adjustment. Baby was a couple of days shy of 8 weeks at the last weigh in, (as you can see from the original dot now marked with the arrow), yet the new mark is plotted at 5 weeks.  This results in an almost 3 week adjustment...

I can still recall the exact words the mother said to me when I expressed surprise at the consultant's nonchalance and checked additional milk was going to be continued :  "You're the only one who is concerned about my baby's weight, everyone else thinks he's fine".  A relative expressed she felt I was causing the mum unnecessary concern and worry, when clearly "those in the know" were happy with his gain.

If parents find their baby is struggling to gain weight, they can soon find themselves on the receiving end of contradictory recommendations and conflicting advice.  They may be told by some just to "feed, feed, feed" or take baby to bed and "baby-moon" (both of which of course assume effective milk transfer when baby is feeding, rather than just burning yet more calories), whilst others are expressing concern and suggesting additional milk is needed alongside identifying the original issue that has led to growth faltering.

A further problem is  many don't really understand the charts, sometimes the graph isn't even completed by healthcare providers.  This means at a glance nobody can even see the growth pattern, let alone know if the baby is tracking an appropriate curve.

First we need to understand they're based on averages.  If we take a huge group of healthy, term, breastfeeding infants - we can identify the typical maximum and minimum rate of growth they undertake.  That's not to say every baby outside this range absolutely has an issue, only that its atypical enough (when compared to the masses) to warrant further investigation.

If we use this data of healthy babies to create a chart - the heaviest infants will of course sit around the top and the lightest infants will sit near the bottom.  We can also calculate the "average" - which would be the 50th percentile line (so half the babies will sit above this line and half below).  This range allows for genetics, stature, build and so on.

It isn't desirable to sit on a particular place on the charts - in fact that's really quite illogical.  We wouldn't take a group of adult females and identify their average weight is 7-13 stone, then tell everyone their optimal weight was 10 stone.  We'd expect the weight of someone who was 5ft and of petite stature, to be less than someone who was 6ft and of broader stature?

The same is true for babies.

Once on the chart, we can similarly expect different levels of gain from those at the top and bottom too - and we know that typical healthy young babies gain roughly 5-8 ounces per week (140-225g), after the first few days and doing so will result in them returning to birthweight by around day 10 and tracking a curve on the chart.

Babies may sometimes plot slightly above or below a line, it doesn't have to be an exact track of a centile but should be thereabouts. 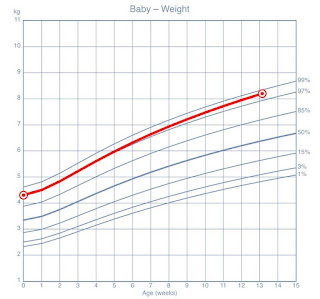 Below we can see the growth chart of a twin baby girl born at 38 weeks, weighing 5lb (2.27kg) and with a tongue tie. Baby was readmitted at a week old with significant weight loss and you can see on the chart where the hospital implemented a "top up" plan.  The next jump up the charts is when the tie was released: 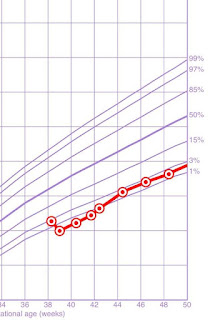 If babies don't gain the expected amount as outlined above, instead if following a curve we see a flatter line appearing as they slide down the charts.  Crossing two centiles triggers referral to a paediatrician to rule out underlying and potentially significant causes.  Thus the saying "a gain is a gain" is ridiculous; I've heard this said when babies have gained 30g per week, the amount expected per day - that somehow as they haven't lost all is well.  Considering nobody seems to check intake before this referral - it also seems a costly exercise too.

When babies are underweight not only can they lack the energy to take a full feed, but they become disorganised and less effective - creating a catch 22 situation.  If this continues week after week, the energy and weight deficit often simply continues to get bigger, rather like you trying to run a marathon when you've just spent a month with Bear Grylls on a desert island.

What evidence are people working from that they feel a very underweight baby is better than one who is supplemented?

The first choice of course would always be mum's own breastmilk, however if baby feeds very frequently due to not transferring enough per feed, finding time to express may be difficult.  If baby has been taking less than they needed for weeks, mum's body similarly may have reduced production and supply may need additional stimulation.

Donated milk may be an option depending on accessibility and more mums are using and sharing donor milk, both informally and via their local milk bank; but for many it will mean considering infant formula.  The concern is that formula disturbs the microbiome, which is of course true - but we surely have to ask whether we believe there are no risks to inadequate food at a time of rapid growth when energy demands are high.

Not enough calories also means potentially not enough vitamins and minerals either.  This could be a whole new discussion in itself, but let's pick one we know is important for the immune system, zinc:

"Mild to moderate zinc deficiency is characterised by stunted growth, deficits in immune function, and altered integrity and function of the gastrointestinal tract (Krebs 2014). Zinc deficiency may be associated with deficits in attention, and motor and cognitive development in children (Black 1998" here

We International Board Certified Lactation Consultants, often the only ones trained in infant feeding - can frequently find ourselves undermined by a whole range of people.

The twin baby above as an example was on a feeding plan - as she had a tie, combined with the fact mum hadn't received adequate advice on protecting her milk supply prior to our visit, this meant at the point we saw them baby couldn't physically transfer enough and the increased demand now exceeded supply.

Despite this a consultant in a different unrelated field (who works with multiples), saw fit to advise the parents to drop all the supplements and just feed her babies.  Thankfully the mother contacted us confirming this wasn't correct, but I do wish people would consider the implications of their lack of specialist knowledge and how parents feel when they receive this conflicting advice, from someone absolutely not in a position to be giving it.

We hear sometimes of underweight babies who seem  happy and settled - they sleep long periods, yet surely if they were hungry they'd wake and cry?  The reality is that hungry babies cry, very hungry babies who've experienced consistently reduced intake don't have the energy to expend crying.  On the contrary, they often sleep longer spells to conserve calories and don't signal too much (which again burns energy) if the feed intake is less than they'd like.   Some will feed very frequently yet never really seem "milk drunk" or full and that's without considering that persistent weight gain concerns can be a huge cause of maternal anxiety.

It's really difficult for parents who are with babies to accurately gauge gain in their newborns based on visual appearance.  Babies change a lot in the early weeks and when with someone a lot it's harder to notice subtle or gradual changes - which is precisely why we weigh newborns.  It's what we do with this information that counts, the earlier a problem is spotted - the more rapidly it can be resolved. Reassuring people things are ok when they're not, in the longterm doesn't help anyone.