When To Introduce a Bottle To a Breastfed Baby?

A few months ago I received a call from a confused mum; her baby was 3 months old, breastfed, and that night he had refused his daily bottle.  Mum couldn't understand why, after all they had given a bottle once per day since week 2 as advised to "get him used to it".  He had always taken it without a problem why now should he refuse?

I get asked when should parents introduce a bottle a lot, and like the mum above many are told early introduction equals success, and conversely if the bottle isn't introduced early then baby is likely to refuse or struggle with technique. 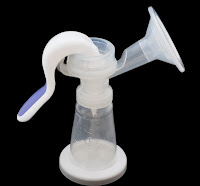 In the early days of breastfeeding (once milk has "come in") your body is trying to establish how much milk your baby needs and thus how much to produce.  It does this based on what is removed, so if you feed baby and then express, your breasts will replace a feed plus more to replace the amount expressed.

Mums often plan to express so dad can give a feed and allow a longer stretch of sleep, but in the early days this often proves rather impractical as missing a feed results in overfull, painful breasts - meaning mum ends up pumping again whilst dad gives the bottle.

Some mums deliberately choose to cultivate an oversupply early on, usually if they want to build a stockpile for some reason ie they want to feed baby now, plus add a regular amount to the freezer.  Otherwise an oversupply can be problematic, leading to engorged painful breasts between feeds, faster flowing milk and increased leaking (as an example at the extreme end of the scale, one mum I worked with had to sleep with a super absorbent nappy taped over each breast at night).

I've spoken to so many mums over the years who have diligently given a bottle every day, or every week from a young age to ensure baby would be used to taking it.

This doesn't however account for the fact babies have personalities.

Some will take that daily/weekly bottle fine until one day they decide out of the blue that they don't want it thanks; others will continue to take a bottle just fine.  Some will refuse a bottle in the early days, then one day decide actually OK they will drink from it.  Others that aren't offered a bottle when young will take it just fine when offered at any age.   The same can also happen to a baby fed exclusively from the bottle.  I've worked with mums struggling to get the necessary amount of formula or expressed milk into baby because they fuss or refuse the bottle, take hours to consume small amounts or leak, splutter and gulp.

Introducing a bottle and finding baby takes it, really only tells you they will do so at that point in time.  It is no indicator of how baby will respond at any point in the future.

It seems a standard expectation (particularly with first babies) that mum will of course express and bottle feed at some point, imagine not being able to leave baby!  Some mums have no alternative but to do so if they need to work or be separated.  On the flipside if you don't need to, it's also OK if you don't want to, mums often tell us that the expectation she will want time away, is greater than her desire to actually do so.

Babies naturally settle into a more predictable pattern of feeding, and so some mums find it's easier to work things in and around this rather than expressing.  From around 4 months some soft spouted cups are suitable if you don't need bottles on a regular basis, and things like a doidy cup can be used even earlier.

Nipple confusion, real or not?

This really depends on who you ask!  In my experience the biggest risk in terms of bottles is if a baby hasn't completely mastered the breast and/or has reduced milk transfer, the flow from a bottle can cause some to quickly show preference to the easiest milk source, causing them to fuss earlier and earlier into breastfeeds (although as the breast isn't just food, they will often be happy to return to it afterwards).  Others in this situation will refuse a bottle outright too, but ultimately the key is resolving the initial problem, the bottle is a symptom.

Although more and more bottles are claiming to be "like the breast", realistically to baby they are still poles apart.  No bottle can deliver the smell, sounds and scents of mum (think Heston Blumenthal style dining). None are made of the same substance as nipples or let down in milk ejections as the breast does.

This can cause some to become impatient waiting for the breast to "letdown", which is why mums are often advised to use the slowest flow teat and encourage sucking without milk beforehand, with regular pauses during the feed.

For an infant refining his breastfeeding technique, I like an analogy Lisa at Everyday Miracle uses.  Imagine you are just learning to use a knife and fork, but at some feeds these are swapped for chopsticks - something that requires a totally different action and technique.

The added difference however is that the bottle requires far less effort than the breast, and the baby may try out techniques that work on the bottle when at the breast:


"When bottle feeding occurs, only the buccinator muscles and the orbicular muscle(s) of the mouth are exerted without stimulating other muscles. They concluded sucking only during breastfeeding promotes correct muscle activity, and thus proper development of the oral motor structures" (1)

It's important to note however....

That giving a bottle doesn't mean baby wont be able to breastfeed effectively again.  I get asked quite frequently whether its worth persisting with breastfeeding if baby has had a bottle, could learning this incorrect action permanently hinder skills at the breast and be the cause of their problems?

Dig a little deeper however and a lot of mums experiencing problems now, who introduced a bottle in the early weeks when trying to establish feeding, did so because they were experiencing a problem; pain, baby that wouldn't leave the breast and settle, slow weight gain - whatever.  So we always have to question what came first, the chicken or the egg?

Even after a bottle baby can still refine, improve and develop their technique at the breast. Conversely some mums never need or want to use one and that's fine too :)

1) The relationship of bottle feeding and other sucking behaviors with speech disorder in Patagonian preschoolers BMC Pediatrics 2009, 9:66 doi:10.1186/1471-2431-9-66
Posted by Analytical Armadillo IBCLC