Imagine the scene - you're a tiny baby and not long ago your home was warm and cosy, cushioned in every sense from the outside world.  Suddenly you're shunted into a bright environment, noises are no longer muffled and food is no longer delivered around the clock.

But it's OK, you're snuggled up with mum and her familiar voice, her skin and now her scent help you adjust as she tends your every need.  You've just settled down for a nap when out of the blue someone strips you starkers, then plonks you on a thin piece of paper, on top of cold hard plastic scale like a stranded beetle.  Your startle reflex is triggered, your hands come up to your face and you let out a big shout, WTF is going on? 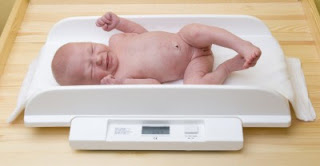 You might kick your legs and wave your arms, why is nobody moving me you shout? Hello! I'm letting you know I'm really not OK with this!

As a result the numbers on the display dance a Cha Cha up and down as watchful eyes wait to see where it will land (if you lay still long enough).

Why do many insist on weighing babies in this way? I don't get it, especially given we don't use analogue scales for weighing anymore.

When I'm baking I could weigh fluid by tipping it all over my digital dinky number, or I could put a bowl on first - tare the scale and then add the liquid. 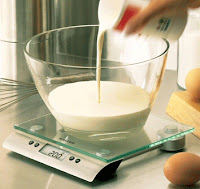 The liquid weighs exactly the same whether it is in a suitable receptacle or not, yet one is far more practical than the other.

Why is weighing a baby different?

Why can't we pop a snuggly blanket on the scale, tare them and then place baby prone, a position they are generally much happier in.  Arms and legs are less likely to flail as the startle reflex isn't triggered - making everything quicker.

In fact do we even have to undress baby at all?

I'm not convinced we do and for some babies this may be even more important.  Premature infants for example need a cardigan, hat and blankets - even in a hospital.  Their skin is thinner and maintaining body temperature is something that can be hard work for them - stripping them off also often prompts lots of crying in these babies too, burning energy and generally stressing their system.

So, back to the baking analogy above.  If I put a bowl on the scale, a cup inside that, an egg cup inside that - tare them and then add fluid; the reading is just as accurate as it would be just with the bowl.

Applied to babies, if parents are aware their baby will be weighed why can't they dress baby in a vest and/or babygrow and/or hat depending on the weather/baby's age, and have a spare set of identical items on hand (as per multipacks)

Place the above along with a new identical nappy and a snuggly blanket on the scale and then tare   Remove the vest, romper and nappy and they will tip to a negative balance.

If you then place baby dressed in a clean nappy (ie change it immediately before weighing), vest and romper as above on top of the blanket prone - tada, you have the same reading as if you stripped baby butt naked and laid him flailing on his back.

Even if you do want to strip baby down, placing a young baby on his tummy on a soft surface, tucking his arms and legs underneath him if he is still quite fetal and curled can help lots.

Really, the stranded beetle is not an essential part of weighing your baby - remember, tummy to the scale if you don't want them to flail...
Posted by Analytical Armadillo IBCLC