Why Are Some Media Outlets So Reluctant To Use Qualified Infant Feeding Advisors?

There has been much discussion this week surrounding the "experts" presented in the media to proffer infant feeding support.

"This Morning" did a breastfeeding feature that resulted in a petition demanding those providing their infant feeding advice, hold a qualification in infant feeding.

It seems crazy to me we're even having this discussion, but as it stands those of us in practice have to squirm uncomfortably as mothers are advised to shake their breasts to change their nipple shape and express to check their supply, by "experts" who compare breastmilk to coca-cola.

This isn't the first time there has been social media uproar over the infant feeding advice given, so why are the media so keen to choose the "experts" they do?

They say a picture speaks a thousand words: 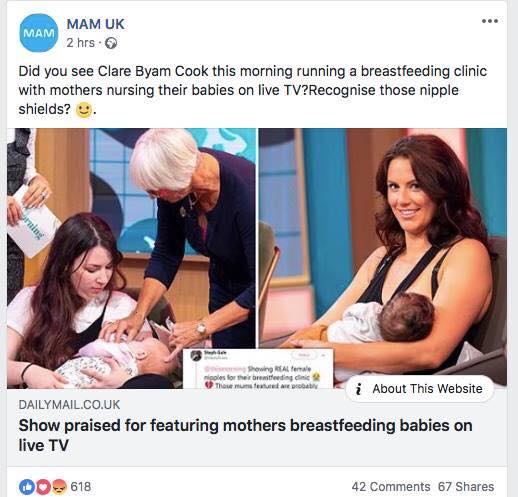 Midwives, International Board Certified Lactation Consultants, Breastfeeding Counsellors, Health Visitors are all bound to a code of practice which includes lack of commercial association along with working from an evidence base:
Evidence base is a tricky thing when it comes to infant feeding and the media.


"The La Leche League, the NCT, the Association of Breastfeeding Mothers and the National Breastfeeding Helpline try hard these days not to sound too judgmental. They do not like being nicknamed ‘the Breastapo’, although some of the NCT’s bossier members can be terrifyingly dogmatic.

‘We support all mothers, however they decide to feed their baby,’ they insist. But their websites also explain that if you choose formula rather than breast milk, your baby is more likely to suffer from gastroenteritis, diarrhoea, respiratory, urinary, gut and ear infections, asthma, pneumonia, diabetes, obesity, leukaemia and a low IQ. Anna Burbidge, a spokesperson for La Leche League, quoted a recent Unicef survey saying that a baby will be more likely to be hospitalised during its first year if not exclusively breast-fed for the first six months."

So supporting mothers means withholding the evidence base so as not to appear "terrifyingly dogmatic"?
The rest of the article makes it clear the author really would like to believe it doesn't matter how we feed our babies and feels this is what we should be telling parents...

I had this discussion recently with another practitioner in the field of infant feeding.  The reality is, some parents may not want the evidence on which to base an informed choice, particularly if this causes cognitive dissonance (ie, when the information contradicts what someone already believes to be true).   We can encourage informed choice - but we can't force it and nor should we.

By the time mums get breastfeeding support, some (understandably) have had enough.  Sometimes we want "permission to stop" - for someone to say, maybe you're just not built for this?

Alongside this, marketers have worked hard to create a "militant" edge to anyone who works in the field of infant feeding.  Breastapo, Breastfeeding Nazis, dogmatic, judgmental, will push you to breastfeed at any cost.

In reality lactation consultants and breastfeeding counsellors are all trained in precisely the opposite, a non-judgmental approach to facilitate the parents to make choices.   But those who profit from the majority of parents purchasing formula, don't want mothers seeking help in their droves, that would never do in terms of profit margin.

Creating a divide so parents are poised to perceive information as judgment is a crucial part of the picture in terms of restricting what parents share and who they reach out to.

Being seen to be supportive of breastfeeding, whilst also people pleasing can be a delicate line to tread - perhaps this is why so many media outlets are so keen to stick to what they know?  The Bruce Forsyth of breastfeeding.
Posted by Analytical Armadillo IBCLC