Ask The Armadillo - Does Breastfeeding Cause Tooth Decay?

Q.  Dear Armadillo
My dentist has warned me to cut nightfeeds now my daughter has some teeth, as it will cause decay.  This is proving easier said than done, is it true breastfeeding at night rots teeth?
Sarah

I contacted Dr Brian Palmer DDS about your question, as a world respected dentist who has extensively studied anthropological evidence surrounding normal oral development, infant feeding and decay - who better?

No, breastfeeding is not thought to cause tooth decay - it's another one of those old breastfeeding myths. It is widely recognized as being the main cause of dental caries (cavities) is caused by bacteria such as streptococcus mutans, which feeds on food sugars producing an acid that causes decay.  It's estimated that around 20% of the population have increased levels of this bacteria (predisposing them to decay) and it can be passed from parent/caregiver to baby via saliva eg a parent sucking baby's pacifier, sharing spoons etc.  A researcher called Berkowitz concluded that "caries is an infectious and transmissible disease".

I think the confusion about breastfeeding and teeth comes from two sources; firstly many don't understand the difference between breastmilk and substitutes and their effect on teeth.  A 1999 study by Erikson demonstrated that some infant formulas dissolve tooth enamel, significantly reduce pH, and cause dental caries.    In addition bottle feeding causes milk to pool around the teeth, because it is delivered much further forward in an infant's mouth.

Secondly whilst an extracted tooth soaked in lactose (the sugar in breastmilk) decayed,  infant teeth exposed to breastmilk as a whole producted react quite differently.  Breastmilk has antibacterial properties, with lactoferrin as a major consituent - and lactoferrin actively helps to neutralise strep mutans.  Furthermore unlike other sugars, lactase enzyme splits lactose into glucose and galactose in the intestines, rather than in the mouth.  When teeth were exposed to breastmilk, it did not cause enamel decalcification even after 12 weeks exposure; furthermore breastmilk did not cause a significant drop in plaque pH when compared to rinsing with water.

In 1999 a study published in Pediatric Dentistry stated:


"It is concluded that human breast milk is not cariogenic."

What the study did find was that when a small amount of sugar was added to the breastmilk, it caused more decay than a sugar solution alone - emphasising the importance of tooth brushing and good dental hygiene to ensure all food particles are removed. (Investigation of the role of human breast milk in caries development, Pediatr Dent. 1999 Mar-Apr;21(2):86-90)

There are 4,640 species of mammals, all of whom breastfeed their young.  Lactose is present in most of the breastmilk of these species, yet humans are the only species with any significant decay in deciduous teeth.    Modern Homo sapiens have been around for 30,000 to 35,000 years, but dental decay, however, did not become a significant problem until about 8,000 to 10,000 years ago.  Anthropologists believe the increase in decay was primarily due to the advent of the cultivated crops. (Brian Palmer DDS)

To support this, there are numerous studies demonstrating no link with decay:

There is not a constant relationship between breastfeeding and the development of dental caries. Mothers should be encouraged to breastfeed as long as they wish."

Prolonged demand breastfeeding does not lead to higher caries prevalence

Small enamel defects can occur when teeth are forming in utero, sometimes due to exposure to medicines eg specific antibiotics. or insufficient calcium intake (Torney 1992). These defects make the teeth more vulnerable and breastmilk is not sufficient to counteract high levels of bacteria.


"Human milk alone does not cause dental caries. Infants exclusively breastfed are not immune to decay due to other factors that impact the infant's risk for tooth decay. Decay causing bacteria (streptococcus mutans) is transmitted to the infant by way of parents, caregivers, and others"

According to Dr Brian Palmer, the following are the most common causes of dental decay:

1. Sugar intake is the primary cause of decay. This includes sugar in otherwise nutritious foods such as juices, cereals, breads, raisins, etc. It also applies to sweetened medications. It is very important to understand that it is not the amount of sugar or carbohydrates to which the teeth are exposed, but rather the frequency of exposure that is the key to the development of decay.

2. The timing of introduction and the number of decay causing bacteria that are introduced into the infant’s mouth.

3. Xerostomia or dryness of the mouth (lack of saliva flow).

4. Illnesses of, or stress to, the mother or fetus during development.

5. Poor dietary habits of the family.

6. Poor oral and overall hygiene of the family.

I've also seen increased rates in infants who have a tight or thick labial frenulum (the little tag of tissue in the center of the upper and the lower lip that attaches the lip to the gums) - perhaps because the area is sensitive it's harder to brush and thus more prone to stray food particles remaining.

You can read Brian's own presentation on breastfeeding and tooth decay here - WARNING, the link contains graphic images within a medical context.

Things you CAN do to help prevent or deal with decay: 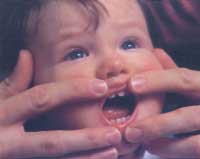 There is a great yahoo group about teeth problems in young children, it has lots of information and dental professionals to give advice - if anyone needs help or options try: http://health.groups.yahoo.com/group/veryyoungkidsteeth