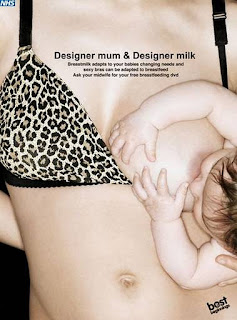 This goes against the grain of everything you were told at antenatal classes, the posters dotted around the hospital and quite possibly every health professional you saw during pregnancy. But really, it's true.

Breast is best is actually just a really clever marketing campaign, but not originally from the people you might expect. In fact, it's a brilliant example of a very common marketing technique - and once you are aware of it, you can spot it around you on a daily basis.

Let's take chickens, a leap I know but bear with me. A normal life for a kept chicken is really quite simple. A hen house to keep them safe at night, an area for them to move about, scrat, food, water and you're pretty much done.

Veer away from these basic requirements and as you might expect you have problems. As Hugh Fearnley-Whittingstall has highlighted with his "chicken out" campaign,, remove their outdoor wandering/scratting area, coup excessive numbers together - and the result is unhealthy, underweight chickens. Unsurprisingly, they need large amounts of antibiotics and other drugs to keep them alive.

These chickens when mature look so bad with their deformed legs and lack of muscle tone, they would never sell; plus they are so scrawny and underweight they wouldn't make enough money for the producers.  This means a process called "plumping" is undertaken.  This is injecting salt water, sodium phosphate and "natural flavorings" (don't get me started on that one!) into the chicken pieces, until they look like something you might be prepared to eat. The legal limit is 15% "other stuff". This means a piece of "standard" chicken can contain more salt than a large serving of French Fries..

Retailing is about pounds kerchinging into the till, not accuracy - and so the marketing bods step in.
The normal chicken is elevated to "best" and they give it a cool name like "free range", "organic", "finest" or "taste the difference".  Lots of different ways to describe a chicken that has in reality, only had an existence which at least met the basic requirements.

Supermarkets sell more "standard chickens" than any other type - and not just because of the price tag.  In fact, even if the price difference was nominal, sales would still be higher. This is because the vast majority of people believe standard is "OK".  Fair enough it might not have quite as much flavour as the "fancy one", but then they didn't home grow the carrots or make the gravy from scratch either. OK does most of us pretty well and this is what the marketing people understand. But let's not forget, in reality it's not standard, it's substandard that is cleverly marketed.

"Breast is best" is a slogan straight off the back of a milk tin and when you understand the marketing it's very clear why. With breastmilk substitutes it actually has a double benefit that isn't seen in other areas of retail.  By law manufacturers are required to state on the tin that their product isn't as good as breastfeeding - as we saw above, should parents get a sniff of substandard they're off and so yep, it's time to call in those marketing bods again.

If we say breastfeeding is best, not only does that allow our product to slip in as "OK", but parents also (unaware of the laws) think we are mightily honest telling them upfront another product is "better" and so trust us; building loyalty and belief in whatever other information we give them. Given most mums will end up using a breastmilk substitute, costing around £700 per year - we can afford to spend a fair bit on advertising to really drive this message home.
Clever huh?