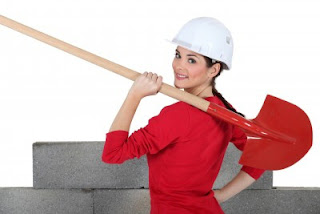 Prior to having children, I wouldn't really call myself a feminist.  Sure I thought women should have equal workplace rights, pay and so on - but really that's as far as it went.  If I'm honest I also quite like chivalry; men opening doors, carrying a heavy bag and so on - which I'm sure to some directly undermines the "feminist movement" as this article discusses.

Yet more recently the discussion surrounding feminism has fascinated me, that people with very different and even directly opposing views can both consider themselves feminist.  And even more recently still how this seems to have become an almost buzz word as a tool in the "parenting wars".

The Globe and mail this week reported:


"Sling-wearing. Co-sleeping. Extended breastfeeding. Ms. Badinter ( French feminist and philosopher) believes that these popular, labour-intensive practices, part of the attachment parenting model, cast women as mothers above all else. In her view, the Betty Drapers of the past have not evolved, but have been remade into glowing Earth Mothers pressured to embrace their biology: “Their increased responsibility for babies and young children has proved just as restrictive, if not more so, than sexism in the home or the workplace,” she writes. “The best allies of men’s dominance have been, quite unwittingly, innocent infants.”


"Ms. Badinter sees co-sleeping, a big part of attachment parenting, as an additional limitation to a woman’s freedom - and to her relationship with her husband or partner, who is often relegated to the couch for months."

Now perhaps the most important point to note about Ms Badinter's comments, is not actually related to feminism - but to the fact that Elisabeth Badinter’s billion-dollar PR company "Publicis" represent Nestlé's breastmilk substitutes.

The second point to note is Publicis also appears to be the go-to agency for the infant formula industry’s other major players as well, including Abbot Laboratories (Similac) and Mead & Johnson (Enfamil) as this webpage discusses.

So to summarise, Elisabeth Badinter’s job is to increase sales of baby formula.

But Elisabeth isn't the only person to voice such an opinion, I've heard other feminists make the same claims (which is perhaps what inspired the latest PR ploy?)

The Wiki description of Feminism is:


"Feminism is a collection of movements aimed at defining, establishing, and defending equal political, economic, and social rights for women.[1][2] In addition, feminism seeks to establish equal opportunities for women in education and employment."


Right, but what about choice?

Isn't feminism about empowering women?  That they alone choose how to use their body and mind?    Surely telling a mum she can't stay at home, breastfeed and raise her family if she wants to is just as bad as her being forced to?  Having to go to out of the home to work is as restrictive as not being allowed?  If mum is the main earner, dad may choose to stay home or both partners may work part time.  Nowadays a whole range of different family setups exist, based on the needs and wants of each unique family.  If a woman wants to "be a mother above all else" (to quote Badinter) why shouldn't she?   If she was chairman of a multi million pound industry "above all else" would that suit?

The reality is that women get pregnant and lactate - men don't.  That's not political but biological - and no amount of campaigning will change it.  We also know that human milk is the normal food for a human infant, and that alternatives aren't as good.  Yet a mother is letting down the feminist movement if she is able to give her young their intended food, and wants to (and is in a position to) stay home with her children?  What about mothers who want to stay home, but can't because financial circumstances don't allow?

What about tackling employers to support women to express at the workplace, so they can choose to work AND feed their child?  What about women who breastfeed, co-sleep and work, either by pumping or by continuing to breastfeed when they are with their infant?  Where do they fit into this feminist mission Badinter speaks of?

Yeah, that sort of feminism wouldn't increase sales of formula though would it?  Let's not forget breastmilk substitute's heyday was during the Second World War,  when National Dried Milk was celebrated for liberating mothers from the constraints of breastfeeding so that they could help with the war effort.

But, in 1939, Nestlé was exporting condensed milk to Singapore and Malaysia as ‘ideal for delicate infants’, though it was banned in the UK for causing rickets and blindness.  Even then it was all about profit (read more here. 60 years later, Dr Cecily Williams said:


‘Misguided propaganda on infant feeding should be punished as the most miserable form of sedition; these deaths should be regarded as murder.’


"The use of infant formula costs the lives of an estimated 9,335 U.S. babies each year."

Yet still manufacturers are allowed to advertise and in the US give free formula samples out at birth.


It seems to me the propaganda continues.  Claims that men are relegated to sofas because the mum is "mothering" rather bizarre.

My other half is a huge co-sleeping convert as he got shed loads more sleep (in our bed!).  A baby is pretty small, not like another adult squeezing in?  I have known dads who have headed off to the sofa, but their partners have at times been bottle feeding.  A restless baby at 3am can exist regardless of how they are fed or where they sleep.

Ultimately if you have to get up and make a bottle as per the DOH recommendations, with baby sometimes crying whilst you do so - how is this more workable for anyone than rolling over and feeding baby from the breast whilst dozing?  I rarely meet a mum who has both breast and bottle fed successfully who claims the latter is easier - the vast majority confirm it's oodles more work.  Sterilising, making up feeds, having to buy and carry everything around.

The role of a mother is often undervalued in society.  Ask a mum what she does and often you will hear "just a mum" (to differentiate from a work outside the home job) - just a mum?  Indeed a mum on Facebook recently discussing the fact that she worked full time, made the comment that the women in her family were strong and independent and should be applauded for that.  Which lays heavy implication that women who choose not to do so are neither.  A mum some years ago stated she worked to set a positive role model for her children, others are asked do they not get bored staying at home?

Perhaps we have come full circle with the feminist movement; our ancestors fought to work, and women today are at times fighting for the right not to - yet ultimately the respect for women and freedom of choice, seems as illusive as it ever was...
Posted by Analytical Armadillo IBCLC

Email ThisBlogThis!Share to TwitterShare to FacebookShare to Pinterest
Labels: Feminism