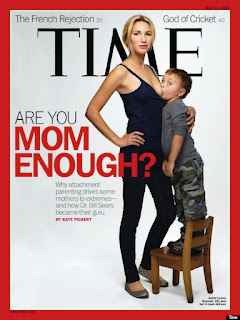 Whilst most are done already with the Time Magazine cover that's caused such a brouhaha this week, it still didn't seem to right to let it pass without even a mention; after all it's not everyday a nearly four year old is featured breastfeeding on the cover of a US magazine right?

Knickers have truly been twisting in all corners.  Some claimed the image pornographic, others that it was damaging to the breastfeeding movement; even those supportive of breastfeeding beyond babyhood have been divided by this cover.

So firstly I should say a big well done to Time!  As far as marketing sensations go, this has to get a ten right?  It's every PR company's dream to have the World's media debating your mag, as the old adage goes   there's no such thing as bad publicity.

But they worked hard at this - the tall toddler who looks older than his years, the abandoning of typical breastfeeding positions and the fact the nursling is standing, not curled on his mother's lap.  The way both parties look at the camera instead of gazing at each other, mum striking a confident challenging pose.  Then the "Top Trump" is the tag, "Are you mum enough", it screams; neatly tapping in to the "mummy guilt culture".

But seriously, isn't it really quite sad that we live in a society where the lines of nurturing a child and pornography seem to so easily blur?  Should we blame Time for tapping in on something that makes the Western World squirm?  That should be firmly be kept behind closed doors, heck we are still debating whether it's appropriate to feed our offspring milk of their own species in public even as a newborn.  A culture where we are forced to contemplate the "knock on effect" to the "breastfeeding movement" and discussing whether it will help or hinder those who choose to do the same. 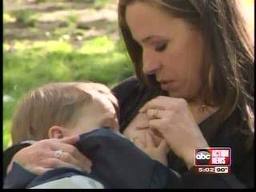 But surely the underlying problem is why feeding a child in any position is "provocative"?

If we took the breastfeeding out of the picture and had a mum and child cuddling in the same post as feature in Time - nobody would say "We don't hug like that", "What an unrealistic portrayal of a hug, both parties looking at the camera instead of each other as you do in a real hug".

It's interesting that society who claims indecency at such a picture, is on the whole entirely comfortable with the sexualisation of children - and perhaps that is the problem.

It's easy to say it's just changing times, that not agreeing is prudish or repressed - but has everyone forgotten we are talking about children here?

Last year a move was taken to ban padded bras for children in high street shops, the fact the manufacturers even considered there may be a market speaking volumes.  In  2010 Mumsnet launched a "Let girls be girls" campaign because of their "concern that an increasingly sexualised culture was dripping, toxically, into the lives of children.".

The problem is so significant that on 11 October 2011, the Prime Minister and Sarah Teather, Minister of State for Children and Families, hosted a summit at 10 Downing Street on tackling the commercialisation and sexualisation of childhood. The summit followed the publication in June of Reg Bailey's report Letting Children be Children, which made a series of practical recommendations to businesses, broadcasters and regulators.

But ultimately there has to be a receptive and lucrative audience for what is being marketed, and isn't it a concern that exists?  The same audience who cannot see the innocence of a child taking comfort from his mother's breast.

My first thoughts when seeing the picture were, that would have been a good idea when my toddler wanted nursing and I was trying to chop veg.  I've clearly been a lactivist far too long.
Posted by Analytical Armadillo IBCLC