You'll probably want to sit down before I present this gem, or pour a large drink, drop a herbal tincture or any combo of the above that floats your boat.  Thanks to the lovely Lynsey at Mothering Matters for sharing this by the way, although I think she could have proffered similar warning ;)

Before we get to the section I want to share, I had a read of what came before.

Jo tells us she's fine with demand feeding a newborn, but by about 4 weeks it's time to start establishing a routine, she calls this "setting firm ground".  What's more she wants you to record the times you feed in your "baby log", which apparently also includes keeping details of your entire diet - cos we all have time for that with a new baby.  Forget preening and snuggling, catching a nap, who has time when there are accurate records to be kept?

"There's controversy over whether women should feed in public.  I think that's neither here nor there"

""baby should not throw up too much"

So now you know. 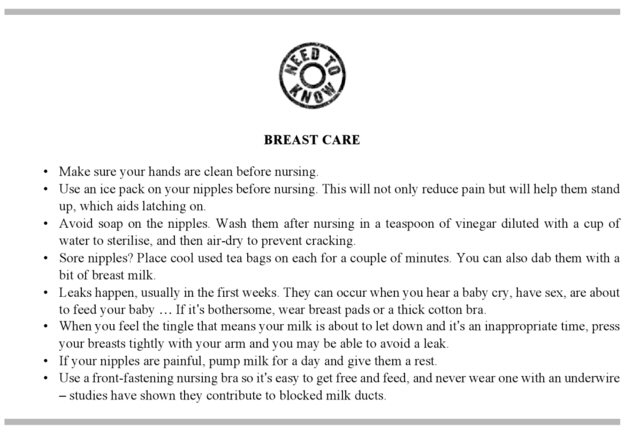 To me it feels like someone has spent some time with Google and a few breastfeeding sites, took a heap of information out of context and knocked it together....

Clean hands - a given.  Your hands should be clean to hold your baby as that's basic hygiene, nothing to do with breastfeeding particularly.

Use an ice pack on your nipples before nursing. This will apparently have the double bonus of reducing pain and "help them to stand up".  Help what stand up a friend asked?

Most full term babies with a normal suck and latching technique do not need nipples to be erect (or er "stood up") before attaching - babies breastfeed they don't nipple feed.  If all mums needed ice to breastfeed, we would have an inbuilt freezer in our abdomen.  Even if mum has flatter nipples baby will often quickly draw them out when latching without any assistance.

Sometimes if nipples are particularly flat or inverted, or if baby has a tongue tie or is a bit less co-ordinated initially due to say a difficult birth, helping them protrude more can help baby attach more easily.  This would usually be done by mum gently rolling between her thumb and finger and then using a latching technique that assists further if needed.

If additional stimulation is required, touching them with a moist cold cloth, a breastpad that has been in the freezer (isn't as cold as an ice pack), using a pump for a few seconds or a nipple eversion tool are all generally preferred by mothers - typically you would only try an ice pack if more convenient/easier methods work.  It isn't a normal thing most people have to do and I can count on one hand the amount of women who've needed ice, in fact I could probably count them on one finger.

Even then it's important to be clear about how to use the cold stimulation, i.e. just a brief touch to stimulate the nipple.  For some mums ice and cold can exacerbate any discomfort or cause vaso-constriction (which means the blood vessels in the nipple tighten and do not let enough blood through) which is extremely painful.

Cold can also cause a slow milk ejection reflex (MER) or "letdown", which could impact on the quality of the feed and how much milk baby can transfer.

For these reasons the majority of women prefer to use cold or more often cool items to soothe after a feed if needed rather than before.  It's important to note this if baby is latching and feeding well there shouldn't be any pain to reduce.

Avoid soap, wash after each breastfeed with vinegar to sterilise the nipples.  At this point I want to give a slow hand-clap to Jo's publisher.  That this could make it past everyone without a raised eyebrow or an edit, oh the shame.

First, the warning Jo forgot - please don't ever apply neat vinegar to your nipples, at least not unless you fancy running the risk of developing chemical burns.

Second, the only thing a mum needs to do after breastfeeding is clip up her bra (if she's wearing one), cuddle her baby and maybe consume some cake. What are we trying to do, make breastfeeding as complicated and time consuming as possible? Can you imagine in the middle of your favourite cafe heading off to vinegar your nipples post-feed?  Purlease!

It's a tad worrying Jo thinks nipples are sterile, how does that even work unless you bath in Milton? (Perhaps I shouldn't give her ideas).  In fact microbes inhabit just about every part of the human body, living on the skin, in the gut, and up the nose; there are 10 times more bacterial cells in your body than human cells. Basically we are the sum of our bacteria.

"Good bacteria" is found around the nipple and areola of healthy pregnant and breastfeeding mothers (which also have glands that secrete an oily substance called lopoid fluid to lubricate and protect them) - and Jo wants mothers to use a disinfectant after every feed, potentially disrupting this delicate bacterial balance, stripping lipoid protection and leaving mum at risk of what?

The only time I've seen vinegar suggested has been to treat Candida, i.e. the mum's bacteria is already out of whack.

We then move on to baby's microbiome, the balance of which is directly linked to his immune system.

What's the impact to his gut flora if mum wipes her nipples with vinegar solution and then baby wants to feed shortly after? We've learnt recently that antibacterial soap can cause disruption linked to diseases including obesity, diabetes, irritable bowel disease, colon cancer, multiple sclerosis and asthma.

What's the result if he has an undiagnosed sulphite allergy or is sensitised to them as a result of exposure?  In Canada sulphites feature in the list of top 10 allergies so it's not that out there.

We should also note that wiping nipples in vinegar solution is an old fashioned weaning technique.  Not surprising given the taste - using Jo's techniques we potentially already have cold, vinegary damp nipples. Delish!

Third, air drying doesn't prevent cracking, a baby latching well to the breast prevents nipple damage (as Jo herself says only a few pages earlier). Air drying after applying a small amount of breastmilk can be soothing if nipples are sore, but the skin isn't broken - if it is moist wound healing becomes more appropriate to prevent a scab forming.

Know what might crack nipples though Jo?  Repeatedly applying vinegar to them after every feed.

Moving on, teabags on the nipples?  Why not? Eco-friendly way to recycle your brew, cheap and effective!

Leaking can happen any time day or night in the early weeks, and I think the triggers listed are more relevant to mothers of older nurslings that don't regularly leak but can still get caught off guard in situations that trigger the release of hormones - such as during sex or when a baby signals hunger. Techniques like applying pressure with arms can be handy when parted from baby and in a public place, but aren't usually relevant in the early weeks of breastfeeding when mum can use the heel of her hand if needed.

For many women leaking in the early days can be a smidge more than "bothersome" to the point of needing a "thick cotton bra top" *cough*. It's not unusual for mums to wear pads constantly for the first few weeks or months and to need to change them frequently.

I also wouldn't recommend mums prone to leaking opt for a cotton top rather than pads.  Pads are absorbent, wick liquid away from the skin and you can whip them out and change them easily.  Sitting for any period of time in a damp, cotton top however is a prime environment for fungus and bacteria to grow.

If your nipples are painful pump milk for a day to give them a rest - and perhaps now would be a good time to get some help too?  Unless Jo has a magic breastfeeding wand that means after a day's rest mum's nipples magically won't become sore again when she resumes feeding?

Lastly use whatever sort of nursing bra you bloody well want.  Front fastening doesn't even make sense, all breastfeeding bra's open at the front so you can breastfeed, otherwise well it would just be well a bra wouldn't it?   Front fastening versus rear fastening is about taking the whole bra on or off, which isn't anything to do with breastfeeding?

As for underwires, I'm not sure what evidence Jo is referring to as I couldn't dig out an underwired bra study; neither it seems could Carmit Archibald ob-gyn, who says:


"The concern about wearing an underwire bra while nursing stems from the idea that the wire could inhibit blood flow and hamper milk production or lead to a clogged duct or even mastitis.
However, there's no real evidence that underwire bras are linked to lactation problems. Any reports of such issues are largely anecdotal"


"Your best bet: Let your own experience and comfort be your guide. If your underwire bra is uncomfortable, don't wear it."

I wish that were the end, but unfortunately Jo hasn't quite finished spreading her own delicious brand of bullshit just yet.

Next she tells us (and it took me a moment to squeeze past her mahoosive ego and process this) that "she's not opposed to pumping", after all one bonus is it allows dads to feed to bond.  I'm not entirely sure what qualifies her to be opposed to pumping or not, given to my knowledge she's not qualified in lactation, has never fed a baby and it isn't her body or baby up for discussion?  With all due respect who gives a toss whether Jo is "opposed" or "agreeable", if a mum wants to express that's her decision.

Should you decide to pump though, according to Jo you can only keep breastmilk in the fridge for 24 hours - a whole 6 days less than the evidence based guidelines quoted by the Breastfeeding Network and shared by UNICEF.

I wonder if the actual plan is to make parents so knackered, they won't cotton on to how crap her advice is? Baby logs, sterilising nipples, air-drying them, throwing away perfectly good milk - I'm grateful nobody gave me these "top tips" first time around.

Parents are then told they need to defrost their milk by running it under warm water, not hot so as to not kill the antibodies.  This doesn't make any sense as the milk is frozen, applying hot water to the outside of the bottle or bag will kill antibodies how?  The milk would have to thaw and heat to be at risk of antibody damage, and even then we know most immunoglobulins survive flash pasteurisation at a rolling boil of 100°C.  There's no mention of the easiest method of thawing milk which is just to leave it overnight in a bag in the fridge, you can either serve chilled if baby enjoys or bring it to body temp.


"Much of this advice is not evidence based and parents should be cautious about following guidance from sources such as this.  I would instead encourage parents to contact their midwife, health visitor, local infant feeding team, breastfeeding support group, breastfeeding counsellor or International Board Certified Lactation Consultants (IBCLC)".