I've observed a big increase in the past 15 years in the diagnosis of reflux.  The number of babies prescribed reflux medication, including proton pump inhibitors (PPI) such as omeprazole has similarly skyrocketed.  The most recent data I could find was to 2004 and diagnosis rates have only continued to climb:

I wrote about reflux several years ago here and questioned how much profitability came into play,  but even I was a tad shocked when a commentary in the Journal of Paediatrics highlighted the following:


"The rise of prescriptions owes a lot to advertising, specifically to use of the term “acid reflux.” Before the mid-1990s, this term was hardly ever used in clinical practice; the medical terms were and are “GER” and “GERD.” In the mid-1990s, rules around direct-to-consumer (DTC) advertising were relaxed in the United States, and expenditures on broadcast advertising for drugs began to ramp up by multiples.23 Around this time, marketers for pharmaceutical companies began to promote and popularize the term “acid reflux” in the increasing advertising blitz for acid-suppressing drugs, both PPIs and H2RAs. “Acid reflux” became embedded in the popular lexicon thanks to the strategy devised by those “not so Mad Men.” The reasoning was simple: if reflux is possibly present—whether physiologic, acid, or non-acid—and you choose to call it acid reflux, it naturally follows that it requires an acid-reducing drug! This manages to blur the lines between normality and pathologies and, with an uncomplicated message to the marketplace, bypass the need for the subtleties of clinical diagnosis. In 2005, PPI sales grossed approximately $13 billion in the United States alone, and the drug on which the most DTC advertising was spent was a PPI."


This increase has brought with it more questions from parents, so I decided to explore the evidence and rationale versus any long-term risks.  If a baby is suffering damage of the oesophagus or is at risk of aspirating acid, the risks of medication may be minor in comparison.  If not, the risks may outweigh benefits.

The first surprise I got, and what I  want to explore in this blog, was when opening the NICE guidance, updated Feb 2015:


"1.2 Initial management of GOR and GORD
1.2.1 Do not use positional management to treat GOR in sleeping infants. In line with NHS advice, infants should be placed on their back when sleeping.
1.2.2 "In breast-fed infants with frequent regurgitation associated with marked distress, ensure that a person with appropriate expertise and training carries out a breastfeeding assessment."

The very first suggestion NICE make for reflux is that someone fully evaluates a feed. That one slipped under 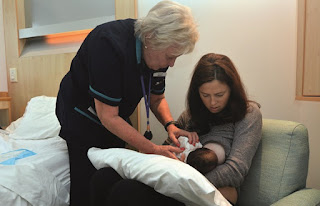 the radar didn't it?

Anyway, hands up if that happened for you?

Anyone else wondering what constitutes a "person with appropriate expertise and training"?

I decided to ask parents via a poll how often their healthcare providers had indeed, fully evaluated breastfeeding as a first course of action.

The results won't be much of a surprise to many: 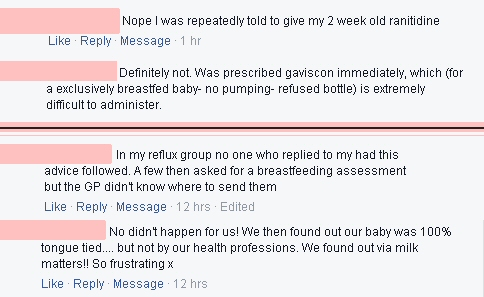 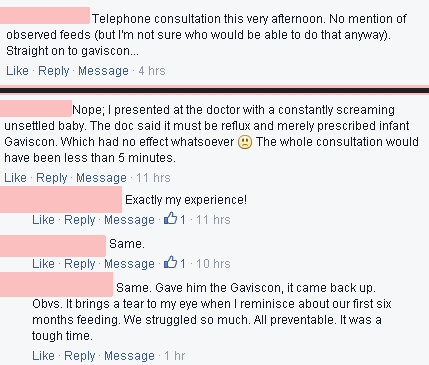 And this is where it gets more complicated in terms of "appropriate expertise and training":

11 yes votes were placed anonymously and 17 were named.  From the 17 identified respondents I asked for more information (at the mercy of Facebook deciding whether to hide your message in some never to be found folder!)  They are as follows: