Discussion - Jo Tantum, Why Won't You Share Your Evidence?

Jo Tantum, for those who haven't heard of her - spoke recently at The Baby Show as their "sleep specialist".  Her webpage claims she is an "expert in all aspects of baby care", so I was naturally curious about what she had to say.  I was even more interested after watching this clip by Baby Calm of Jo's presentation at The Baby Show, and reading her comments that followed.

On both her webpage and at The Baby Show, Jo makes the following claims:


" Jo's advice is tried, tested and backed up with robust research"


Intrigued I replied to Jo on the Baby Calm discussion above - you can see my comment is still there.  But no reply.

Next I posted on her Facebook wall, politely mentioning I had left a reply on the Baby Calm blog, but was also posting there in case it had been missed.  I again asked if she could please let me know the details of the studies she is referring to.

This message received over 50 Facebook likes - yet when I returned it had been deleted and I had been banned.

All comments had been removed except one, to which Jo had replied - it's probably just easier for me to show you, and the comments that followed.

So, in her reply - second comment down, Jo clarifies she has research from around the World.  Before going on to share er none of it.

But then the Milk Matters post was deleted too. 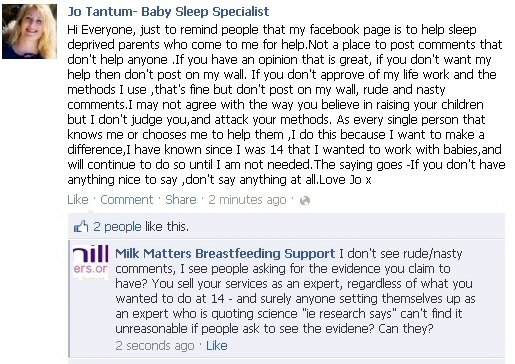 It's even more confusing given on her "information" tab on Facebook, Jo Tantum claims to have all the answers - yet when asked by lots of mums what evidence she is basing her "research shows", we can't get a reply to a simple question?  Only censored?

This isn't even about agreeing or disagreeing with Jo Tantum's techniques - far from it, nor is it about what Jo dreamed of doing when she was 14!  If you sell your services and an expert, and you claim your views are evidence based - why nowhere on Jo's site are there any research links, and why is every request for them no matter how polite refused?

When parents complained their posts had been removed, Jo claimed she had deleted them as they were "not nice" I don't see how any of the polite requests for information could be construed as "not nice" - I can't see how it is anything other than perfectly reasonable.  One Tantum fan claimed mums asking for evidence was "internet bullying" - which baffled me even more!  I do know pulling the "It's really mean of you to ask little old me when I'm just trying to help" card is a rather naff cop out technique, purely because she has been asked a perfectly reasonable question by other equally polite parents..

It seems we're not going to get an answer as Jo's last quote claims she doesn't have time.  I would argue that the ongoing censorship of her Facebook wall must take significantly longer than copying and posting references you claim your work is based upon.

PS having just read some rather eye brow raising breastfeeding advice, I would also like to ask what qualifications Jo Tantum has in the field of breastfeeding - if anyone knows, please do let me know!

UPDATE
Someone has alerted me to the fact Jo continued her message above: 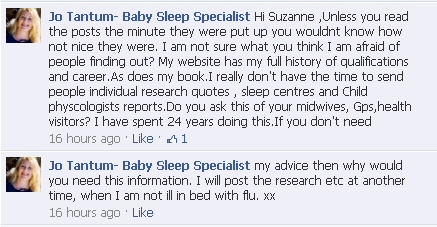 So Jo does confirm she will post this information.

Which rather begs the question as to why I couldn't just get this reply to my very first question?  ie - Sure when I feel better I will share?  Why was I deleted and banned for asking?

However the next thing to appear wasn't the research:

But a mum on Facebook also poster another screenshot comments that followed this message, before they too were deleted.  Note Jo's comments re evidence... 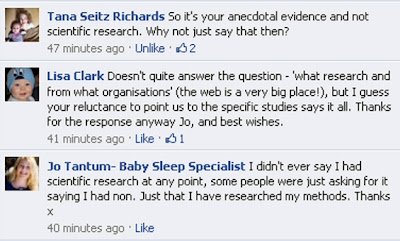 From the comments on Facebook rather a lot of mums that asked for the evidence quoted seem to have been removed from Jo's Facebook page, which seems a rather hostile way to deal with what started out as a polite request for information?  Disappointing as the stats Jo quoted on her website entry seemed so definite, I was looking forward to getting my teeth into a good robust research paper - unfortunately, for me anecdotal doesn't often cut it.