Something I've seen more and more recently is an increase in the number of people who appreciate donor milk is a better substitute for a mother's own milk, than that of a different species.

Donor milk sharing groups online and the discussion that follows - means more are becoming informed as to the differences between human and bovine milk, and potential associated risks of substitutes.

The age of the internet and social media also makes information sharing faster and easier than ever before -  many are now not only able to access things like research papers and journals, but then share their findings quickly and with a wide audience.

This means parents are no longer reliant on what best seller is lining the shelves of their local book shop - instead they have a much better chance of finding evidence based information and making their choices accordingly.

Some comments I've seen online recently:
And of course this makes sense.

But how practical is it in reality to exclusively feed your baby with donated breastmilk? 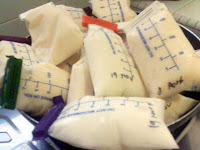 I began pondering this more deeply a few months ago at a weekend Milk Matters Clinic.  A mum early in the day came and brought with her a full carrier bag of frozen breastmilk, which was to be collected by a friend of hers who was attending later in the day. .As I popped it in the freezer I marvelled at bulging bag after bag of milk this mum had generously agreed to share.

Later in the day said mum arrived, I handed over the milk and she said how thankful she was etc - how this now meant she had milk until Wednesday.

Bearing in mind it was already Saturday, I looked at what appeared to be a vast amount of milk and realised if that is feeding baby exclusively - indeed such an impressive stash was just a short few days worth of nutrition.  The mum was extremely grateful, but it struck me that it must be really difficult to be frantically trying to arrange enough food for your baby, knowing after X days you would run out if more couldn't be found. 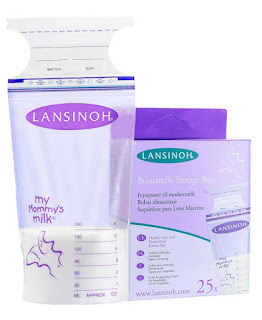 Now consider the typical breastmilk bag holds around 6oz of milk, the consider that a baby can take anywhere up to say 35oz per day.  That's 6 bags per day.

Any mum who has expressed may now be starting to realise the implications of this.

Even if a mum expresses 8oz in one sitting, she would need to do that 6 times per day to supply another mum.  Most mums donate excess breastmilk they may collect once or twice per day - expecting a mum to fit 6 expressing sessions is a big ask, especially longer term.

This means that realistically one baby needs multiple donors - perhaps up to 6 or 7 if mum only has a few oz per day extra, more if logistics mean collection isn't always reliable, or to ensure there is enough if someone goes on holiday or gets sick.

One mum I spoke to recently expressed her frustration at comments online that suggested obtaining breastmilk was as easy as just asking, and that despite a genuine medical necessity the breastmilk bank could not help her either as her baby wasn't premature.

The other issue is this mum would prefer to have access to tested & pasteurised milk from her milk bank, or be able to flash pasteurise the milk at home (if the milk hadn't come from someone she knew, or a friend of a friend or suchlike).  However receiving frozen donor milk which is the norm, makes this very difficult as you can't refreeze the milk - hence it would need to be thawed and then flash pasteurised before each feed, hardly practical with a baby and older toddler.

Some mums are more than happy to share and use non pasteurised milk, others are concerned about potential risks of this or of accidental contamination whilst pumping - but as things stand I'm not convinced exclusive feeding of either is viable for many if the baby is not premature (and even then donor milk may only be offered for a limited amount of time, ie until baby is term sometimes)

So - I decided to have a chat with a mum currently in this situation, Alison kindly agreed to share her experiences:

Q. How old is is your baby now and what percentage of milk requirements are fulfilled with donor milk?

Q. How much are you actually able to source on average as breastmilk and is this reliable?A. At the moment, I'm able to source typically half of that (12-15oz) - for the 1st 6 or 7 weeks I managed to exclusively use expressed breastmilk as I'd stockpiled ahead of the birth, after that I had a period with no expressed milk at all - one mama was accepted by the milk bank and so decided to donate their instead,  and my other donor had a serious bout of D&V and pumped & dumped for a few weeks as she was doing so many nasty nappies she was worried about contaminating the milk

Q. What is the emotional/psychological impact of having to introduce formula when you wanted breastmilk, and of being reliant on others?A.   When I have to feed formula it makes me sad & angry - this is something I should be able to do myself, but I can't and there is no formal support for me (even my GP asked me where I got donor milk from and had never heard of a Lactaid!) . I have a baby who gets a rash on her forehead when I give her formula, but I have no option but to do so to give her nourishment. I avoid the GP and use natural remedies to try and treat it, but within hours of formula it gets red & angry - I know how to fix it, but I can't - makes me feel inadequate, frustrated, sad and a useless mother. I feel I'm letting my baby down, but friends & family don't understand, nor do most breastfeeders or non breastfeeders.

Q. What would you like to see happen with regard to donor milk sharing?A. The NHS should actively promote milk donation and encourage mums that can feed to donate to people that can't. They should also encourage mums that can't feed to use donor milk and give useful, realistic advice on the risks, benefits and practical implications of using donor milk rather than simply saying "most mums that can't feed buy formula" (answer from my GP when I asked about help I could get - I thought I may get formula on prescription, but PCT says no as there is no medical condition ("with the child"))

Why isn't the NHS doing more?

Whilst years ago some actually believed formula was superior to breastmilk, the NHS and all other World Health Authorities now recognise this is not so.  They advise mothers that they should breastfeed for 6 months, they sometimes disclose the risks of not doing so - yet when the NHS cannot resolve breastfeeding issues for a mother, why are there no systems in place for her to have the option of obtaining human milk?  Why is she then advised to use bovine milk?

One minute she is being told "breast is best", another she finds herself in a situation with no alternative but to use a replacement.

Seems to me that's a bit like a Doctor repeatedly telling a mum X drug is much better than Y for several months, before prescribing Y when the time comes for her to need it.  Yet the mum goes online and everywhere she clicks there are messages about how Y is riskier - but getting X simply isn't an option for her...


If formula wasn't an easy option, would the government be allowing babies to die, or would they have ensured better breastfeeding support and sharing networks?  As things stand there is not only an easy alternative, but as The Politics Of Breastfeeding discusses the NHS also receives "donations" from substitute manufacturers.  In contrast breastmilk is relatively expensive to store, pasteurise etc; according to Baby Milk Action the cost of breastmilk is 130 Euros per litre.

Unfortunately this doesn't really offer much in the way of an incentive to change.

But scratch a little deeper and the picture is different.

In the UK, a NICE costing report evaluated possible savings from being awarded Baby Friendly Initiative accreditation. They said.
“The evaluation assumes that a 10% improvement in initiation rates is a realistic target.
“On the basis of medical literature we assume that an increase in the number of babies that breastfeed will lead to a reduction in healthcare expenditure because of avoided cases of otitis media (ear infection), gastroenteritis and asthma. On the basis of an annual birth rate of 605,634 a 10% improvement in breastfeeding would mean that 60,563 additional babies would be breastfed.”
Savings
• about 17,000 cases of otitis media avoided at a saving of £509,000.
• almost 3900 cases of gastroenteritis being avoided, at a saving of £2.6 million
• over 1500 cases of asthma being avoided, at a saving of £2.6 million.
• a reduction in the cost of teats and formula of £102,000
BMA

One NHS midwife recently commented that if they need to supplement they can just take formula from the cupboard, but for donor milk it is a different budget system and they have to send off the funding request for approval.  It's lengthy admin wise and funding is much more limited - there has to be an identifiable benefit to providing the breastmilk, which typically is only recognised for premature babies within the NHS setting (and even this has taken years of hard work and campaigning by many!)

Hmmmmm yet don't forget "Breast Is Best" right?  Can we hardly blame mums for not being convinced by this flaky message (breast isn't best it's just the normal food a human infant is supposed to eat) and contradictory practice.  If the hospital is giving out formula, how bad can it be right?

If all the mums that say they would use breastmilk, donated when they had their baby, and if the NHS included donation and sharing details in their antenatal classes  - perhaps we could go some way to provoking a change?   To trying to facilitate a reliable supply for mothers who have a genuine medical need, and appropriate effective breastfeeding support for those who are having problems due to ineffective help, that could be rectified.
Posted by Analytical Armadillo IBCLC