A lot of the books I have read that encourage a schedule, claim it results in a perfectly content baby because all babies thrive from the security of a routine, of knowing what comes next.  It therefore follows that living life to a timetable creates stability and predictability that a baby loves.

But I'm not at all convinced that a routine is synonymous with a schedule.

Sched·ule
Noun: A plan for carrying out a process or procedure, giving lists of intended events and times: "we have drawn up an engineering schedule".

Noun: A sequence of actions regularly followed; a fixed program: "I settled down into a routine".

So a schedule is a list of events and times, a routine is a sequence of actions - but is there a time implication?

When I wake up in the morning I have a routine - a pattern of events that has naturally evolved.  First I make coffee, then breakfast, then whilst the children are getting washed/dressed/teeth brushed I tend to have a quick check of emails and Facebook, then I get ready, finish off any bits eg hair brushing for the squids, we collect lunches, sports kits and out the door.

This does indeed run roughly to a schedule, because we have to be at the school bus for a set time - but even when both were flexi - schooled and we had a couple of days at home, we followed the "routine" but generally an hour later on non school days.  The routine was not interlinked with the time.

For many routines are instinctive human behaviour, and we implement them naturally.  Following a pattern in the morning, or have an order in which things are done before bed and so on (even if it's as simple as one person lets the dog out whilst another gets the lights).

Non of this means we do the routines to a stopwatch - sure life generally has some constraints that force a schedule, but we have variety too.  During the week one may be forced to eat lunch at a set time, does this mean at the weekend an alarm is set to ensure this doesn't vary?  We at least sometimes have brunch, if we're out and about we may get lunch at whatever time is convenient, if we've had snacks we don't normally have we might eat later!  Some days I may eat numerous snacks, other days I don't feel as hungry... 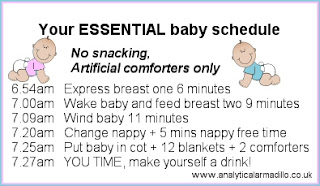 Ditto getting up - how many who have to leave for work at 5.30am during the week choose to rise later on their days off?   That same person may have a pattern of going to bed at a set time during the week so they feel awake enough to wake at 5.30, yet decide to go out the night before their day off because they have no forced schedule?  Not having a schedule is often relished, the freedom it brings.

Whilst routines provide us with a sense of comfort, schedules are not an integral part of human nature and in fact they can for many be hard!

Suggesting a baby needs to wake, eat, sleep, snack, snooze at the same time and for the same duration every day - based on the fact humans like routines makes little sense to me; it doesn't reflect "normal life".  Whilst most babies adopt a rough napping pattern and some do sleep almost like clockwork, many vary; for example one baby taking two naps per day may sleep longer one day compared to another, perhaps after a busier than usual morning, or an appointment that prompted an earlier start than typical.  Some mums have a wide and varied pattern to their routine, with school runs or after school commitments, meaning nap times change on a day to day basis; it's OK to live life around one baby's routine until you have several children!

Even if we take sleep out of the equation, how healthy is it to teach a baby to eat and drink to a clock?  Not when hunger and thirst strike but to a clock?   How can this in any shape contribute to self regulating appetite and recognising hunger and satiation when older?  How often do you go four hours without eating or drinking anything?

Many baby books warn should you not follow a schedule your baby will never sleep resulting in shattered, unable to function parents and babies who cannot stop snacking! (but that's one for another blog entry)  Yet omit to focus on the fact that following their plan means you are tied to a schedule 24/7 - the aim your baby will wake at a set time and if not you will wake them. No weekend lay ins  following a bad night teething, no visit friends at the weekend and staying slightly later knowing you can all sleep longer in the morning.  Mind you, given some routines state you must always put baby to nap in their cot, if following this visiting friends for longer than a couple of hours is ruled out anyway!  Even in the very early days when baby is super portable and sleeps anywhere.