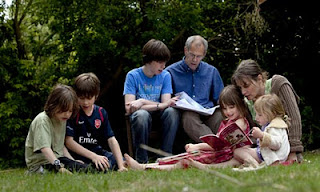 This is by far the most common concern I hear raised about home education.  That children will miss out on socialising;  forming a peer group, team sports and so on.

This assumption appears to make sense; school = large group of children, home = parents plus 1+ child.  As most people send their children to school, this is the norm, the basis for comparison.

The reality could not be further from the truth.

Before my eldest started full time school at 6, we did part time flexi schooling.  This meant she attended the Montessori for 2-4 days per week and was home schooled the other days, an arrangement that suited us really well.

During this time I dipped my toe into the home schooling pond for our "days off" and was quite surprised to find just how many people in the area were home schooling!  There are several area networks within easy reach and the range of activities running on a regular basis is vast; ice skating, gymnastics, french club, construction clubs and open groups that include creative writing and themes such as countries and so on.

Our favourite was an open group run in a local gymnasium - some bits of climbing equipment and a huge open space for the children to run and play.  Team games, creative stuff, instruments - the children always had something going on.

On top of this were numerous days out to museums and learning events - often heavily discounted or free as the joy of home ed is you can access everything whilst everyone else is at school.

Aside from all these arranged social gatherings, what it's worth remembering is that social encounters are numerous even just going about normal daily business.

As one mum during a discussion on Facebook highlighted:


"Don't underestimate how everyday life produces opportunities to learn. Trips to the supermarket? Maths, budgeting, socialisation, reading, writing (a list). Its all there!"


"Being with a parent while socialising with peers has many benefits too.
In a school environment it's like the blind leading the blind.We get told they "need" to go to nursery / school to "learn how to socialise" but in actual fact WHO are they learning from? If all kids are going to "learn" then who is teaching them? The adults."

When you think about it, whilst classrooms are a good way to provide an education to "the masses", nobody has ever proven, nor attempted to that schools are the best way for children to learn; or that grouping 20-30 all same aged children together improves the outcome in any area including socially (see research below). 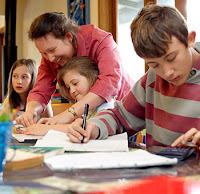 When home educating, younger children learn from watching and role modelling themselves on the older end.  For those a little older, helping and mixing with younger ones not only builds confidence, but also develops social skills further as they are used to interacting with a wide age range including adults.  Just like those educated in a mainstream school, the older home educated children arrange sleepovers and have play dates, attend after school clubs or groups - they do not live in a cave ;-)

Indeed in non mainstream settings there is much less of a boy/girl divide, play is often mixed.  Similarly there is less pairing off with a best friend noted, whilst of course closer friendships develop, play tends to be inclusive and spanning a wider age range.

One mum raised a concern that again I think is common:

"In a school environment your child learns a lot by being around other children and they make friends. Obviously they can make friends elsewhere if they are home schooled but the interaction is different because in school they aren't with you"

But when you really think about it, what exactly does a child learn away from you that they won't learn with you?  To stand up for themselves?  Do we assume that if a disagreement gets too much and the child seeks support from his parent he will end up a pushover or unable to solve a disagreement without his mum?

Children in mainstream seek a teacher, and they step in and deal with matters appropriately (or not depending upon how good the teacher is, previous "reputation" of the child, what they witnessed and so on).

When home educated children play out of earshot of their parents (which they do, they aren't chained at the ankle) if there's a disagreement they too seek help - it may be that an older child playing negotiates a solution, it could be a carer/parent.  But if it's the latter they talk to the child about what has gone on and help him come up with solutions to resolve what has happened - setting him up with the skills to progress and do this himself as he matures.

I've never witnessed any physical fighting, name calling or bullying at a home education session and I can't personally see any reason it would be beneficial for a child to endure any of the above?

It was really interesting today to hear from a mum who was home educated herself too:

"I think the socialisation concern is the most common misconception I have always encountered, I am 32 and people always seem amazed I can string a sentence together when they find out I didnt go to school. The only socialisation I recall from my brief time in school is being mildly bullied and feeling generally bewildered at what was going on socially. There are 4 of us so I did have siblings with me all day then went to play out when school ended with kids on my street who did go to school. Also had lots of pen friends ( probably dont exist now lol) who were home ed. Home ed is what you make it and my mums approach was very laid back so I pretty much taught myself from reading and doing little projects.  Btw I have excellent communication skills and 2 degrees so I thoroughly advocate home schooling to anyone and feel I gained more than I could have ever missed out on."


"Despite the concerns of the general public, the typical home educated child participates in a wide range of activities outside the home (Mattox, 1999). In 1992, Prof. Larry Shyers assessed whether or not home educated children suffered from retarded social development and found that public school children had significantly more problem behaviours than did home educated children. Possibly this is because the primary models of behaviour for the home educated are their parents, rather than their peers. Shyers also concluded that there was no significant difference between home educated and schooled children in terms of either self-concept development or assertiveness. According to Prof. Thomas Smedley's research, home educated students are more mature and better socialised than those in either public or private schools (Smedley, 1992). Dr Raymond Moore's research indicated that home educated children were happier, better adjusted, more thoughtful, competent, and sociable (Moore, 1986). A Cornell University study showed that schooled children become peer dependent while those who learn with their parents had more self-confidence, optimism and courage to explore".


Home-schooled students may have the academic edge over their public schooled peers, according to a new study from the Canadian Journal of Behavioral Science.


"The study, which examined the test scores of 74 students ages 5-10, found that kids educated in structured home school environments actually outperformed their public school counterparts in math and reading.

Researchers found that public school kids tested either at or above their grade level, while home-schoolers tested about a half-grade higher in math and 2.2 grades higher in reading.
“Structured home-schooling may offer opportunities for academic performance beyond those typically experienced in public schools,” author Sandra Martin-Chang, a professor at Concordia University, said in a statement about the results. The test score differences remained even after researchers controlled for income levels, the mother’s education, employment and marital status."


"According to the U.S. Department of Education, "Virtually all the available data show that the group of home schooled children who are tested is above average." Such impressive results have been observable for at least 15 years with home-educated children in the U.S. surpassing the national averages on both the major college-entrance tests. Time Magazine reported that "the average home schooler's SAT score is 1100 - 80 points higher than the average score for the general population." Dr. Lawrence Rudner's research covered 20,760 home-schooled students and found that in every subject and at every grade level, they scored significantly higher than their public and private school counterparts. Similarly, a Moore Foundation study of parents who had been arrested for truancy found that their children ranked 30 percent higher on standard tests than the average schooled child."

"Interestingly, Rudner found that having at least one parent who is a certified teacher has no significant effect on the achievement levels of home-schooled students. Test scores of children whose parents had ever held a teaching degree were only three percentile points higher than those whose parents had not. Children who were taught at home by mothers who had never finished high school, still scored well above public and private school students. Students who had been home educated for their entire academic lives scored higher with SAT scores improving from the 59th percentile for those home educated for one year to the 92nd percentile for those home educated for seven years. (Ray, 1997). According to Rudner's research, home schooling families typically have an above average income, are two parent families and have above the average number of children."

When you think about it logically, this kinda makes sense.  A classroom situation has to try and ensure all have grasped the lesson.  This means those who have grasped quickly can be waiting for those who haven't to catch up, similarly someone that needs more support in a specific area may need more than that dedicated lesson.  When learning is individual, things grasped quickly can be expanded upon rapidly and more time and focus can be given to areas that don't come as easily.


"Homeschooled children can accomplish in a few hours what takes a typical classroom a week or more to cover. In a recent interview, John Taylor Gatto, New York City Teacher of the Year and a 26-year teaching veteran, said that in many classrooms less than one hour out of each school day is spent on "on task" learning."

Jane from Playful Minds agrees, when asked how long she thought it would take to cover in a day what is typically covered in a school day, she replied:


"Going by my extensive experience of being in 100's of schools as a freelancer.....I would estimate 2 hours tops!"

Add no homework to that and you can see why home education is becoming a viable choice for a growing number of families.