When does opinion become judgement?

"Judgement" is something most of us who frequent anything parenting related are used to hearing.  It pops up a  lot surrounding parenting - mothers who "felt judged", or others imploring not to; I recently read a whole article dedicated to the "judgy mothers".  Which set me wondering - when does opinion become judgement?


1. A belief or judgment that rests on grounds insufficient to produce complete certainty.
2. A personal view, attitude, or appraisal.
3. The formal expression of a professional judgment: to ask for a second Medical opinion.

Judge:
Verb
1.  To form a judgment or opinion of; decide upon critically: You can't judge a book by its cover.
2.  To infer, think, or hold as an opinion; conclude about or assess: He judged her to be correct.
3.  To make a careful guess about; estimate: We judged the distance to be about four miles. 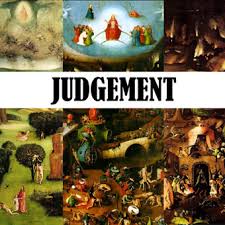 I'm sure there are clear examples most can easily define as judgement v opinion, ie a person stating "mothers who do "X" are "Y" is what most would call a judgemental statement.  But don't these lines become blurred at times?

Take a topic like say nursing covers; some love, some hate - if someone says "mothers who use covers are .........", this is clearly a judgement statement.  Howeve if someone says "I don't think them discreet, I think them a waste of money", is this an opinion or is it a judgment of mothers using covers?

I suspect it would depend upon who you ask, because it seems to me an opinion is more likely to tip into judgement when there's another person or people that the opinion involves. I think a significant factor in how a reader perceives a comment is how they feel themselves about the subject  - ie someone who hates using a cover but feels they have to, is far more likely to feel judged by a negative opinion than someone who has never tried a cover.

How many times have we read a forum where someone has expressed an opinion about breastmilk substitutes (the product or manufacturers) before someone who uses one accuses them of being "judgy" towards mums who use the product, and before long the thread has morphed into a breast v substitute debate?  So in this case didn't the reader feel judged by the other persons opinion? Even if the writer neither felt nor intended judgement?

Of course there are times we read clear judgement statements, but in all honesty I think everyone at some point will judge something - almost as an element of human instinct.  Don't we just all have a different triggers as to what pushes that button?  Don't we all at times have to make an effort to not judge?

For example despite being an open breastfeeding supporter, despite thinking that substitutes are not at all comparable and on a large scale significantly impact on health - I don't feel "judgy" about mothers who have to or want to use a substitute.  Perhaps because I understand all the reasons, politics and social issues surrounding feeding, it's not a button presser for me (and I think often when we understand the big picture, this is key to reducing judgement)

Last week however stood in a shop was a different story.  I watched a young mum fill her arms with crisps and sweets before asking her 2ish year old daughter what else she wanted.  When her friend replied "what, are you buying her the entire shop?", her friend laughed (as her daughter selected several more packets of stuff) and said well we haven't eaten yet today.  It was 1.30pm and her daughter was clearly getting a lunch of sugars and E numbers.

Rightly or wrongly my very instant reaction is surely everyone knows that's not an adequate meal for a toddler, when for less money she could have got a sandwich from the shop right next door?  Of course that's not really the big picture and there may be lots of other factors at play - who am I to judge?  But we are raised in a society that often does aren't we?  Isn't that what tabloids are for?

What about when Jackson held his toddler over a balcony - didn't most "judge" him?  Ditto when Britney rode around with baby on lap minus carseat!


A telling article was featured in the Guardian this week entitled "I'm sick of all this mutual surveillance – let's put a stop to the Mummy Wars - When it comes to motherhood, our culture can be hugely judgmental. Surely we can do things differently without forming hostile tribes?"

However you've got through your kids' holidays, I won't be judging your parenting skills. It's my new resolution.

It's something I wish more mothers would do: stop telling others how to mother.

You do the best you can to guess what's going to work for the whole family … but total strangers (as well as close friends, which hurts more) are going to judge you, and even if they don't, the little voices in your head will chime in.

And this last sentence really sums things up, as a parent even if nobody is judging we can feel judged.  A good example is a toddler tantrum in a public place - many parents cringe and feel embarrassed even if nobody is paying the slightest bit of attention!

Further into the article Emma then says:


Yesterday in Toys R Us there was a little girl – no older than three – in high heels. In fact, in a complete copy of her mother's outfit. My teeth clamped together. I was within an inch of saying, "Excuse me, do you realize you're crippling your child because you're a narcissist?" Only the awareness that it would lead to a strained silence at best, a trashy catfight in the aisles at worst, kept my mouth shut. I talked myself down: she's not beating the little girl's soles with a thorny branch. Probably the kid spends most of the day in trainers and this is just a special dress-up moment. But I was judging, all right.

So in only a few paragraphs the no judging resolution fell through.  Sometimes, whatever the trigger - judgement can be an instant reaction.

Whats even more interesting is the next comment of how Emma was an inch away from saying something to the mother - a complete stranger shopping with her child.  She was so ready she had to "talk herself down".   I was a bit taken aback at this, because regardless as to what fleeting thoughts I might have about something like my shopping experience or even Emma's -  unless a child was in danger I would never, ever think it my place to comment!  As she goes on to say there could be so many factors you may not know - and she's right, from one observation you do not see "the big picture" to form any sort of educated opinion, let alone pass comment!

Guilt and judgement are both I think also heavily linked with strategies used by formula manufacturers - "Mothers who can't breastfeed shouldn't be made to feel guilty" is a prime line.  Yet who suggested they should?  In fact in the big picture why on earth should a mum who can't breastfeed feel guilty?  Shouldn't the formula companies who spend vast amounts promoting their products and undermining breastfeeding take some of the blame?  or the health professionals who give a mum such poor support she is then left with no alternative but to use another milk or compromise the health of her infant?  By telling someone not to feel guilt, it actually infers they should - and covers up the real issue.

Is judgement that different?  Take a conversation where people are expressing opinions - if someone then says "don't be judgemental" (where nobody actually was) others are then far more likely to perceive previous comments as such - because we know human nature and that people are easily capable of judging, even if it's not taking place at that point.  If we sow the seeds of the idea someone is judging, we then feel defensive - particularly if it's an issue that's sensitive to us anyway,  because as Emma said "even if they don't, the little voices in your head will chime in."

Potentially therefore telling people "not to judge", can I think at times be an inflammatory comment.  Perhaps instead we should be reassuring mothers that opinions are not a judgement of them as individuals and that nobody is perfect; to encourage them to try and read opinions as a stand alone viewpoint, not always as something laden with judgement.

We should absolutely remind mothers like Emma that she has no place voicing any of her opinions to a complete stranger, because frankly it's really none of her business what another parent chooses to do.  Whilst she is quite entitled to have her opinions on tacky clothing or bad shoes - she isn't entitled to comment on an individuals situation.  We should be supporting, educating to promote understanding and encouraging compassion to other mothers - doing things that remove the "judgy" element is surely far more important than just saying the words. Ultimately what we all need to remember is that without the big picture, a judgement is worthless anyway, and the more we feel empowered by our parenting choices, the less vulnerable we are.