Today I received this:

Content that you shared on Facebook has been removed because it violated Facebook's Statement of Rights and Responsibilities. Shares that contain nudity, or any kind of graphic or sexually suggestive content, are not permitted on Facebook.

This message serves as a warning. Additional violations may result in the termination of your account. Please read the Statement of Rights and
Responsibilities carefully and refrain from posting abusive material in the future. Thanks in advance for your understanding and cooperation.

I asked what was removed ie what breached their terms, but weirdly Facebook will not disclose this - why on earth not if they want to help ensure it isn't posted again?

Unfortunately, for technical and security reasons, Facebook cannot provide you with a description or copy of the removed content.

Technical reasons?  So Facebook can connect users worldwide with a whole array of features - but they do not have the technical ability to notify someone of what was removed?  The security comment baffles me as where is the security issue in telling someone what they have done that was inappropriate?

I have no idea what violated the terms - I certainly haven't posted anything containing "nudity, or any kind of graphic or sexually suggestive content".  In fact I remove any breastfeeding pictures anyone else posts - because I don't want to give Facebook a reason to delete me,  so I am totally baffled at what on earth I have done, because I know I haven't posted anything obscene!  I've been through the statement of rights and responsibilities as Facebook suggest on their help page, but can't find anything else there beyond the same comments as above.
As one fan said:


That is so weird. I really do think they should actually tell you which image/article was reported so that you know what exactly they think violated the tos. Saying "You broke the rules! Don't do it again!" isn't actually helpful in preventing anyone avoiding such things in the future, you need to actually know what they objected to because it is all so subjective.

And then the penny dropped.  Facebook doesn't want to ensure you don't do it again - they seemingly just want to delete breastfeeding groups.  By not telling you what you did wrong, you can't even defend your position or argue your case.  Once any breastfeeding group hits a certain size - Facebook suddenly starts sending these messages, and before long the groups have been deleted for breaching terms.

It has puzzled me why Facebook seems to have such an aversion to breastfeeding.  Girls topless or in tiny bikinis or thongs, showing more than the breastfeeding pics are allowed to stay - yet provide educational information about something fundamentally key to the health of many and you get deleted?  Sometimes a picture really helps a mum hold her baby better for feeding - but as nobody seems to know where the "Facebook decency line" stands, who dares post one?  Even breastfeeding images the BBC find suitable for their website news are considered obscene on Facebook!

I'm sure any regular users cannot fail to notice the sheer number of formula adverts on Facebook - nearly every page contains one.  And weirdly my profile after 12 months has suddenly become of interest to Facebook, since I started reporting these adverts as "offensive".  Just how much money do these adverts generate for Facebook - compared to all our breastfeeding pages that earn them diddly?  Have meetings have taken place behind the scenes I wonder?  Or is the sheer revenue generated enough?

Because the fact is Facebook only finds breasts "offensive" in relation to infant feeding.  There is a group called "tits" and I know for a fact several friends have reported images here and on many other pages as obscene - do they get deleted?  No!  Even though one image on the afore mentioned group shows a man licking a woman's breast - so men licking breasts = fine, baby feeding at a breast = obscene; just so we're clear.


I can't remember all the pages &amp; images I reported a few months ago, but when I checked later *none* of them had been removed ...

Yet even a company that made hats looking like breasts for babies was deleted - yes really, a KNITTED hat!!


Simon Axten, a Facebook representative who responded to my questions, e-mailed me the following response:  "Our policy prohibits photos of actual nude people, not paintings or sculptures."

Over a quarter of a million people have "fanned" the page "Hey Facebook, breastfeeding is not obscene" but Facebook aren't listening.  From the page:

Breastfeeding is normal. Women have breasts to produce milk for their babies, and babies are born to be breastfed. In most of the world everyone knows this, and breastfeeding is “no big deal". In North America, however, and some other parts of the “developed” world...we seem to have forgotten this very simple truth. Womens' breasts have become a symbol of sex. They are used to sell everything from cars to clothes to beer....they have been deemed obscene, sexually explicit and indecent for view by Facebook. Ironic, isn't it? that in the context of sex, we are inundated with images everywhere we look of womens' breasts as commodity, but see practically no examples of them shown in the normal context of breastfeeding

And that my friends, is the true obscenity....

It's also interesting the policy only appears to apply to images not words - type almost any expletive you can think of into Facebook and there is likely a group for it. A quick peruse of a few and the written content was definitely graphic and sexually suggestive - but if it's to titillate, not to educate it can stay...

The trouble is Facebook is a Faceless machine, you can't engage in conversation with them, nor even email them - and who defends breastfeeders?  In fact who defends women and the right to obtain information to help them?  Whereas the media will often put pressure on large organisations to reform - there has been no such support for those working tirelessly to help others; but then we don't have the cash the big manufacturers do, and no doubt the newspapers don't want to upset them either.

Perhaps Britain's biggest selling baby and parenting magazine could be influential?  Oh no wait I forgot, the Editor of Mother &amp; Baby couldn't be fagged breastfeeding didn't want to risk her (already) saggy funbags -and as one Facebook user put it, the publication is always "awash with formula adverts", again Kerching!

Some users feel if they keep plugging away at Facebook, change will come - personally I won't hold my breath, the politics and revenue involved in infant feeding are powerful.  So powerful we have a huge chunk of society who feel they were just not able to breastfeed - and who strive to defend those who serve to undermine them, sad but not surprising. 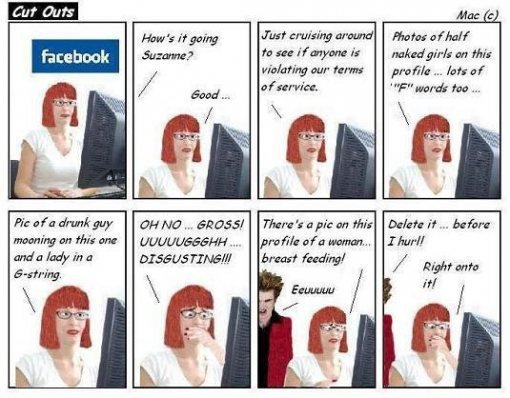 Related Post - Breastfeeding is offensive, see for yourself.
Posted by Analytical Armadillo IBCLC