Earlier I read How To Support Women Without Demonising Formula and whilst I'm in absolute agreement that demonising women is pointless, hurtful and damaging to breastfeeding advocacy; another part of me as "A Lactivist" feels yet again attacked as a "Breastfeeding Nazi".

"It can be very tempting to further the normalization of breastfeeding by demonizing formula, or worse, by demonizing formula-feeding mothers.  It calls to you.  The information's right there, and, if you breastfeed, it makes you feel better about yourself and better about your struggles and your hard work to bring it up.  I remember!  It's so tempting to respond to the Similac recall with "Serves you right, you should have breastfed" or "Boobs don't have bugs, this is mom's fault."  Formula sucks."

Firstly would someone explain to me what demonising formula is?  If someone says x is a risk of formula - is that demonising it?  if so do we not tell mothers about the risk?, do we lie?  I ask this genuinely as I also feel that there are a lot of posts and articles online claiming the "benefits are minimal", or "it's nearly the same nowadays" as per my entry "When you can prove formula is nearly as good we'll talk" - a lot of women still believe these claims are true.

Demonising women is another issue entirely, but more about that in a second.

Most lactivists have never fed their babies an ounce of formula, and some (certainly not all) really seem to enjoy making that fact very known.  They should be proud, but sometimes comments cross the line.  Formula-feeding mothers are referred to as "lazy", "selfish", "lame", "stupid", "irresponsible" and worse.  I'm not pulling this from my own imagination; I am a member of many natural parenting groups and have seen all of these accusations in the last month. 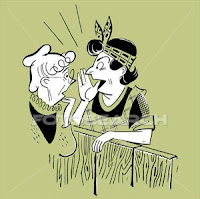 I won't dispute things like this are said, just like some non breastfeeders will openly state they think "breastfeeding is disgusting", "women who do it are perverts" or "too attached to their child".  Is this all non breastfeeders?  No and it would be silly to suggest it was.  There will always be the gang of school bullies in the playground or the gossips over the fence   But are these people  "lactivists" as a group?


What is a Lactivist?

I googled this and here is a good round up of what I believe a Lactivist to be:

"I believe anyone who believes in, supports and promotes breastfeeding and the value it provides to mother, who fights the good fight to enable women to MAKE THEIR OWN CHOICE when it comes to breastfeeding (e.g. safely breastfeeding in public, breastfeeding education, access to help, not having formula shoved down your throat at the hospital, etc) makes you a lactivist.  In other words, it's not just about how far you yourself go, it's also about enabling women everywhere."

For me, lactivism is about supporting the legal rights of mothers to breastfeed where and when they want, for as long as they want, and it's about making sure people are educated on the subject so that they can make informed choices which are right and healthy for their family.  I don't think an individual's ability to breastfeed, or the length of time that they do it, has anything to do with whether a person can be a breastfeeding advocate.

I think a "lactivist" is someone who actively works to promote, protect, and support breastfeeding.

Is calling non breastfeeding mothers  "lazy", "selfish", "lame", "stupid", "irresponsible" and worse, in anyway fulfilling the criteria above?  Is it aligned with the role of a lactivist at all?  No. As has been pointed out this is actually harmful to breastfeeding advocacy and doing nothing to educate or support breastfeeding?  One could argue to advocate for something you have to fully understand it, and anyone who fully understands the politics of breastfeeding - wouldn't say the statements above!

"Acts of lactivism" I've observed recently include: writing to a supermarket that their leaflet was factually incorrect, reporting breaches of the laws surrounding the promotion and sale of infant formula, supporting a mother's right to express at work if she wants to or even telling Facebook, "Hey breastfeeding is not obscene!"  They don't include telling a mother who finds beetles in her baby milk that it's her own fault for not breastfeeding?!  That's like saying if you find a roach in your meal in a restaurant, it's your own fault for eating out!  Utterly ridiculous.

Whilst many of the women who say the above things may not have ever used formula,  just like the other movements mentioned most Lactivists have either a) had to use some formula, or express and supplement at least in the shorterm, b)  had a really hard time breastfeeding and feels passionate others get better support, c) have worked in a role that led to them witnessing the poor care of mothers and/or learning a lot about breastfeeding or d) have learnt about breastfeeding and it's barriers and have a feminist streak so want to empower others.  The most passionate women are those who have endured something, or observed it, got through it and want to help others.

A true lactivist does not seek to demonise women, but to empower and support those who need help.  To present accurate, unbiased, unjudgmental information on which parents can make a truly informed choice. Yes we fight the myths and yes many of us feel a need to point out information is wrong when it is.  But most of us understand the myriad of factors that influence breastfeeding choices and chance of success - and we work damn hard in a system that promotes breastfeeding so often, yet values it so little.

Please next time give women who make comments such as the above a different title, don't demonise the Lactivist.  Without Lactivists there would be no Baby Friendly accredited hospitals, no breastfeeding support organisations, helpines or volunteer drop in groups - and definitely no online breastfeeding resources not sponsored by formula manufacturers or the government.

If you believe lactivism is about true breastfeeding advocacy, please share this article.
Posted by Analytical Armadillo IBCLC