Effective breastfeeding - it's not all about the latch 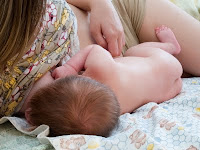 It was a new mum that first mentioned this to me, and as soon as she did it dawned on me that she was totally right.  When supporting mums, lots of focus is on latch - because obviously the better the latch, often the less pain and the more effectively baby can feed; but all too often we meet a mum with a slow gaining baby who is always wanting to feed, or perhaps a mum with sore/cracked nipples sometimes resulting in a the shape of a lipstick! and then we hear "the midwife/health visitor has checked my latch and said it was fine...".  Really if I had a pound for everytime I heard it, I would be writing this blog from Mauritius

This mum called me because she fell into all three of these categories - her baby was being supplemented with expressed breastmilk because of very slow gain, nipples were sore which the midwife had put down to baby spending long periods at the breast (with her supposed "perfect latch") and mum instinctively knew something wasn't right that was being missed.  Almost as soon as I had stepped through the door mum posed the question that had been bothering her: "everyone keeps telling me everything is fine, but I really don't think she's actually having much milk, yet when I say she doesn't seem to swallow lots,  they just keep saying latch looks fine - can it appear fine and yet baby still not take much milk?

And she's right- there's often little emphasis from mainstream sources on how to tell if baby is actually drinking lots of milk, either to mums or to health professionals; sure jaw moving and a swallow pattern generally gets some coverage - but does such basic information really help a new mum or busy health professional?

Whilst latch is a significant indicator, there are several problems with relying solely on it; firstly unless you are trained and experienced specifically in this area, identifying good latch from not so effective can be a tricky job.  Babies can look well latched on and in fact be swallowing little, and others can start well and gradually close their mouth as the feed progresses.

Those helping in the early days often hand over to someone else for later care - so some never see the longterm outcome of their advice, never realise that latch they thought was "fine" really wasn't.  Shoes are my favourite example - it's comparable to someone saying their shoes hurt, having whopping great heel blisters and then an experienced shoe fitter telling them that "sorry, but they appear to fit fine".

Secondly even if someone feels confident assessing latch, it's about more than just what is going on externally and is visible to the eye; as a very wise lady one told me - unless you have x-ray vision to see what is going on inside, it's impossible to state with any certainty things are "fine" - not when mum is presenting with all the signs something isn't right.  Milk transfer is still the key -  is the baby effectively milking the breast and drinking to satiation when they get there?  or are they attempting the equivalent of drinking through a squished straw and running out of steam before they are truly finished, often never experiencing the "drunk" look babies get at the end of a feed, perhaps wanting to feed again an hour later?

Lastly latch can be subjective - some infants "appear" to be attached suboptimally, yet take lots of milk, fill nappies appropriately and are content and settled between feeds; if mum and baby are happy with time spent at the breast and baby is growing as expected - sometimes the phrase "if it aint broken, don't fix it" is worth remembering.
﻿

Back to the mum I started with; I observed a feed in her favourite position - mouth was wide and taking some breast tissue, rather than just the "nipple suckling" that causes hollow cheeks and seems to be the typical "bad latch" often recognised.  However baby was not latched asymmetrically, and it became immediately apparent that whilst baby occasionally swallowed, little milk was being consumed; mum was totally right.  Had the midwife been watching for milk transfer as well as latch, it would have been picked up a lot earlier than when I saw her at 6 weeks.

The next bit of this article is lifted from another recent entry I made: Is my breastfed baby getting enough?  (and things you can do if not) - and it perfectly highlights how a baby may "appear" to some to be latched "ok", but it actually not latched well enough to be able to drink efficiently!

The first clip below shows "nibbling" or ineffective feeding: Baby is doing almost no drinking. A baby who breastfeeds only with this type of sucking could stay on the breast for hours and still not get enough milk. Something needs to be done here and if achieving a better latch, using compression doesn’t help, the baby almost certainly needs to be supplemented (Newman).


Now compare this to the clip below, where baby is doing some really good drinking: The pauses are very long (this is the mouth filling); this baby could spend a very short period of time on the breast and still be getting plenty of milk (Newman)


Note the difference in positioning in these clips.  In the first baby is meeting the breast almost vertically - with nose, mouth and chin meeting the breast at the same time.  As you can see the baby's nose sites very close to the breast, potentially making it difficult for him to feed well and breathe easily.   In the second clip baby's head is flexed back and the chin meets the breast first, the nose is then well clear from the breast tissue.  This asymmetric latch means more of the areola below the nipple than above is in baby's mouth - allowing him to milk the breast easily and consume lots of milk.

It's also not always a case of excellent or bad - there can be a whole host of "good" drinkers too, which is another great example of why timing feeds just doesn't work.  A baby feeding as per the really good drinking clip is is likely to be satiated super fast, maybe as little as ten minutes - the next clip below shows a "good drinker" - still milking the breast effectively, but not quite as well as the "really good feeding" above (note the shorter pauses) so maybe he will take 20 minutes.  The baby in the very first clip is likely never to be truly satiated and may hang around an age and then want to feed again perhaps only an hour later.  Please note these times are only examples!