Surrender - how is it relevant to childbirth and motherhood?

My last entry was about pain relief during labour, and whilst hunting for inspiration I met an antenatal teacher who passionately believes that the mind affects the way a woman births. Tamara has also trained with Birthing From Within and dedicated her life's work to preparing women for birth and motherhood on a psychological level.  I thought although less "sciency" and evidence based than normal - this article was very apt and worth a share...

I first learnt about the meaning of surrender many years ago when I was travelling. Two weeks into my journey, while camping on a remote island in Fiji, I got a bad bug – high fever, vomiting, no doctor and no way to escape the intense heat of the day, I rode the waves of the illness. In my weakened state, I continued my journey to Australia and although the intensity of the bug had subsided, I was still very vulnerable and developed an exhausting relentless cough, with extremely low energy. Gradually all my joints started aching and all this time I am repeating the mantra “I mustn’t be ill, I must get better now, I am travelling and must make the most of it and enjoy myself”. For me, the last straw was when, with all these symptoms I got caught out in the rain with no protective clothing and my inner judge was saying “Now you will really pay for it, you’ll probably get pneumonia”. All of a sudden I was forced into a place where I could go no further. I was cornered. And I just said to myself “I surrender” and in that moment everything shifted for me. I was no longer fighting my symptoms. I was the way I was, for better or for worse and there was no fight or resistance left in me. It may sound like a powerless position but in fact it was quite the opposite. I had allowed myself to “be” and felt waves of relief and acceptance wash over me. As I felt myself soften to the experience, almost immediately my joints stopped hurting. It was a turning point for me towards my recovery.

So what has surrendering got to do with giving birth and becoming a mother?

In a man’s world, the unconscious expectations and pressures on a woman are huge. A woman is expected to be level headed and logical every day of the month instead of embracing the ebb and flow of a woman’s cycle. Surrender seems to be a dirty word in our left brain culture of being in control of our lives. Women absorb images of career success in a society where material and professional status are highly rated on one hand and motherhood, child rearing and staying at home are downgraded. The modern career woman typically favours structure, control and logic in her life. When she is called to motherhood, she finds herself in a new world of unpredictability, loss of control and sometimes chaos. The tools she has accumulated in her career world no longer serve her as she searches for new ways to be in her new role. The process of surrendering is essential in order move through this transition, this rite of passage from maiden to mother.

Transition into motherhood is a rite of passage and an initiation. Within the process is the death of the maiden, the letting go and therefore the surrendering of the known that creates a space and an opening for the possibility of the welcoming and embracing of the unknown – and the mother is born.

Nowadays women are encouraged to be in control of their birth experiences. This can manifest in a number of ways by choosing to avoid pain, choosing the date of the birth, wanting to be in control or stay calm. All these choices go against the wildness, unpredictability and the essence of birth which is surrendering into the unknown. The choices give rise to unrealistic expectations of how the birth will unfold and attachment to the outcome. Whether the attachment be to homebirth, breastfeeding, epidural or caesarean birth, the point is that birth is a rite of passage and the unexpected may arise so the more prepared the woman is to surrendering to the unknown, the easier she can embrace her birth into motherhood and gradually integrate her new role into all aspects of her being. Once the baby is born, mothers are also expected to continue soldiering on like a man without acknowledging sleepless night, breastfeeding and the emotional rollercoaster of motherhood.

In my own journey into motherhood I eventually experienced surrender after a long labour of holding onto my ideal birth with all my might. This holding actually slowed down my labour process. This is because the act of holding creates tension in the body and tension releases stress hormones that slow down the release of oxytocin (the birth hormone), hence labour was slow to progress. After 6 days of labouring and clinging tight to my perfect image of having a home birth, I went to hospital ready to have my baby cut out of me. When I got to the ugly hospital and saw the ugly labour ward with the ugly view from the window, I suddenly knew that that was the right place for me to birth my baby and I did it, but only after letting go of everything I believed to be true about the way I was going to give birth.

In my work as an antenatal teacher, I have explored the issue of surrendering with my clients. In this example I asked the women to draw what surrendering into the unknown meant to them and this is what they came up with:

Laura Newman (pregnant in her third trimester with first child) 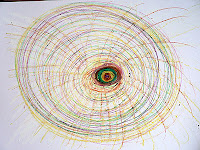 a vital web, then all the colours and intensity of the universe join up and we explode in light and joy and surrender is no longer suffering but an experience of wonder and joy, vitality and colour of the universe

Priya Mahtani (pregnant in her third trimester with second child) 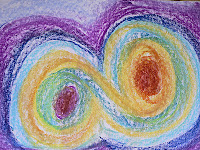 Surrender is simply acceptance an allowing of what is and of what has ever been, an allowing of that which seeks to express itself within you, through you and around. Fear not that in surrender you shall lose yourself sweet child, but … to embrace the wholeness by all that you are. In surrender you shall accept the light that is within to shine ever more brightly than before, to awaken that which you seek in surrender to thy love, be not afraid for I shall be with you as I have ever been, illuminating your world with light.

So what are the conditions that allow for surrendering? What catalyses the turning point? Is it still possible to surrender when you have choices?

These are questions I have asked myself. There is no formula and each woman will find her own unique way. The essential qualities I have found so far that help are: accepting the situation (even if it is not the way you would like it to be), relaxing into the not knowing and allowing it to be there, noticing how you have been able (or not) to surrender in other areas of your life. An exploration of what that means to the pregnant woman can her help to prepare for the unknown, the transition and the rite of passage into motherhood.

Tamara Donn, based in Hertfordshire, runs the Birth Art Cafe and EFT for pregnancy and other workshops for women trying to conceive, pregnant women and new mums. For more information on Tamara’s work see http://www.birthartcafe.co.uk/ and http://www.eftforwomen.co.uk/
Posted by Analytical Armadillo IBCLC