How does pain relief in labour affect breastfeeding?

I've touched on this in other entries, but as a couple of mums have contacted me for further information - I thought a blog post focusing on it a bit more was appropriate.

Opiates: eg Pethidine, Meptid
These cross the placenta and have been heavily linked with making baby sleepy and uncoordinated. Below is a clip showing the difference between non medicated and medicated infants at the breast immediately after birth. 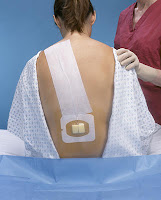 The research on epidurals is very mixed - many studies only look at breastfeeding rates at X weeks, but realistically there can be so many factors influencing this; are mums who don't have epidurals more into natural birthing and thus more likely to breastfeed anyway?  There has been no causal effect proven.  A couple of studies suggest baby may be less co-ordinated/more sleepy, but again no adjustment was made for duration or ease of labour/delivery or baby's condition at birth.   One study found infants exposed to epidural had less feeds in the first 24 hours, but again did the mum have the epidural as it was a very long labour and so this is why baby and perhaps also mum are more sleepy? is it because mum isn't mobile and so less likely to nurse baby or be sleeping herself?

Both epidurals and opiates may impact in another way though; they have been linked to longer labours (likely because mum is on back) with increased risk of instrumental delivery (ventouse/forceps) and cesarean section.  Birth immediately shifts to a different path and mum and baby have to be more closely monitored, with staff often getting nervous quicker if things aren't progressing quite as quickly as hoped.

Both are more heavily linked to breastfeeding problems postparum and shorter duration of exlusive feeding - either because baby is unco-ordinated/sleepy or because mum has found the birth very traumatic.  Epidurals can also increase the risk of excess fluid retention causing breast oedema - which can result in baby then struggling to latch on the overfull breast.

Perhaps we should consider birthing in the same way we do breastfeeding - by establishing the biological norm?

According to the Academy of Breastfeeding Medicine (www.bfmed.org),

Because this is how our bodies are intended to birth - thus with any veering from this ie analgesics, we should be looking for evidence they don't impact, not that they do.


The reality of cultural norms surrounding birth at the moment are such that many women choose a medicated birth unaware of all the above (including myself with my first as I worked my way through the drugs cabinet and had both pethidine and epidural following induction!), rates of intervention and section are far higher than necessary because so many of our birth practices inhibit normal labour.

Does that mean all is lost?  Absolutely not!

When things "go wrong" with breastfeeding, more often than not it's a "cascade effect" - just like that described above.  Let's go back to the mum with the sleepy/uninterested newborn - if they've had forceps, probably a headache too.  Expecting baby to feed straight after birth, mum maybe tired gets concerned baby isn't latching on, next the midwives get twitchy and perhaps start talking about blood sugars and suchlike.  Somewhere in and amongst this, baby is likely to have been taken off for routine weighing, which has also been shown to hinder effective establishment of breastfeeding.

Next perhaps grandparents pop in for a quick visit- and skin to skin is again cut short so the baby can be passed around for a cuddle; exposed the foreign microbes and not yet receiving any protection from mum's breastmilk.  By now even the unmedicated, responsive term baby has settled down for a good snooze - let alone those that were tired or uncoordinated to begin with.

Baby rouses, but is now placed in a position that hinders his natural reflexes (ie on his back rather than skin to skin on mum), perhaps even wrapped in a blanket, quite possibly still very tired he may do his best to follow his instincts.  Those caring for mum and baby might suggest a good feed will get him going, perhaps a bottle?  even more itchy now about blood sugars/protocols and often ill equipped in both skills and time to sit and help mum establish feeding.  On hand are lots of "ready made convenient disposable bottles" of substitute and I've regularly heard of mums being told "we need to see you feed before you leave, a bottle will mean you get home quicker" (aka we get our bed back on our busy ward, and ultimately we don't have to deal with follow up problems!)

Next feed, mum may try again - or may decide already that baby took the bottle so easily he "clearly preferred it".  Perhaps it hurts, mum can't get baby comfortable - which is more likely if feeding wasn't initiated immediately after birth, perhaps baby won't open wide enough to latch - due to his sore head; the solution again, another bottle.

Is the cascade inevitable?
NOPE!

This sounds too easy but ask for help - many many mothers don't.  If the person who is looking after you isn't helping, ask to see someone else - ask if the hospital has a specialist, a lactation consultant or infant feeding advisor.  If you don't take the bottle - often you find help is found somewhere, because after all they're all twitchy about blood sugars remember?  Whilst there are times that supplementation is genuinely required - there are a lot more times that babies are needlessly supplemented.  Read, read and read some more before your baby arrives - so you know what to expect, and what to do if things aren't working as well as you'd hoped.

For anyone who fancies a deeper read into the subject of how birth impacts this book is a fantastic read (Amazon US has reviews but not UK for some reason.)

On the subject of "normal birth", this is one of my favourites.
Posted by Analytical Armadillo IBCLC