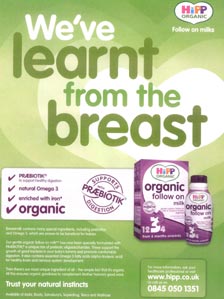 An advertising campaign for Hipp Organic has been banned for claiming the product helps develop the brain and nervous system of young children, ruled the ASA.


The Advertising Standards Authority (ASA) challenged whether Hipp Organic's claim that the milk aided brain and nervous system development could be substantiated.  It said that information given by Hipp Organic "was not sufficiently robust to support the product's claims in relation to healthy brain and nervous system development", adding: "We therefore concluded that the ad was misleading."

The ASA ruled that the ad must not appear again in its current form and told the company not to use claims in future that refer to children's development and health that do not comply with advertising regulations.
Posted by Analytical Armadillo IBCLC