So I guess the day had to come.  A third warning for "explicit" material shared on Facebook and thus a 24 hour ban. 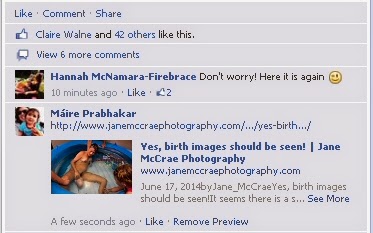 Has anyone ever seen a thumbnail so explicit?  Are your eyes bleeding?

I didn't choose the image, it was auto selected when I linked to the article - and it was so small on my phone I didn't clock it.  At the time the first post was deleted it had received close to 600 likes.


So we can clearly see it's a woman giving birth - but I fail to see what's offensive.  There is no vagina, vulva or anus on display?  There are breasts, pubic hair, inner thigh and a baby's head.

Which of these is the deal breaker?

My page (as it quite clearly states at the top), is about pregnancy, BIRTH and breastfeeding.  We're not even talking random birth shots appearing on peoples friend feed which have been discussed recently.  We are talking about over 13 thousand fans who have clicked to like my page and its topics.

The problem is we are inundated with the media's portrayal of how horrific birth is; women flat on their backs wailing, some choosing a C-section purely because they can't face the thought of it.

Perhaps what people actually find offensive, is a woman not only having a beautiful labour, but also clearly enjoying giving birth.

It's always interesting to watch people's reactions if the topic of orgasmic birth comes up.  Whilst this can mean everything from a pleasurable labour to literally having an orgasm, a super common response is "ew, that's a bit weird".  If an agonising toil is our cultural norm, then enjoying birth is I guess the polar opposite to that and weird to some, out of their comfort zone.

But the "ew" response, particularly from women, that is most interesting; that some are clearly uncomfortable with the thought of a woman enjoying delivering her baby.

It reminds me of an extract I remember reading from an 1894 newsletter giving advice to "new brides" who of course weren't supposed to enjoy sex:

"At this point, dear reader, let me concede one shocking truth. Some young women actually anticipate the wedding night ordeal with curiosity and pleasure! Beware such an attitude!"

"On the other hand, the bride's terror need not be extreme. While sex is at best revolting and at worst rather painful, it has to be endured, and has been by women since the beginning of time, and is compensated for by the monogamous home and by the children produced through it."

"She will be absolutely silent or babble about her housework while he's huffing and puffing away. Above all, she will lie perfectly still and never under any circumstances grunt or groan while the act is in progress. As soon as the husband has completed the act, the wise wife will start nagging him about various minor tasks she wishes him to perform on the morrow."

Whilst we might have come a long way, even now there is more stigma with a female wanting or admitting to enjoying sex - and it seems birth too.  I can't help but wonder if it's not all about a bigger power play, and empowered women are almost as scary as *whispers* breasts.  Oh only female breasts though, those belonging to men are fine to be out on show, even when they're bigger than mine.

Why?  Because as Jane quite rightly pointed out in her article - C-section images are not considered explicit. They can be mid-surgery with baby pulled half way out and nobody bats an eyelid if that appears on their feed over their morning cornflakes.

It seems to me it's fine for women's bodies to be on Facebook if they're vajazzled or popping out of skimpy underwear, or if they're hanging off the arm of a rapper who is singing about his "ho".   But see a woman so clearly in control, showing her body without intent to titillate and suddenly nature becomes offensive.
Posted by Analytical Armadillo IBCLC