How society judges our children...

My two are as opposite as chalk and cheese. 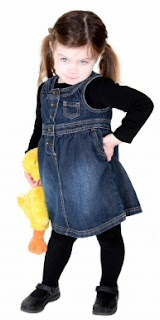 My eldest is dark haired, dark eyed,very tall and "forward" for her age; spirited, feisty, takes no crap kinda kid, kind, empathic and friendly.  Knows her mind and sticks to it - explain why something isn't OK and you're likely to get co-operation; bark instructions and you get a look of "And what are you going to do if I don't?".  At two she looked and sounded like an average four year old, I was often asked which school she went to.  Other children typically also think she's older and she's a make a friend everywhere you go type.

In contrast my son has blonde curls which were even whiter when younger, bright blue eyes, is angelic looking and small for his age (though not so much these days!), quite chilled out although can absolutely demonstrate his emotions with the best of them - does this in a different way to his sister.  Rather than voicing his objections loudly and with passion, he goes for ignoring something he doesn't fancy doing - or tries to appeal with smiles and winning you over rather than the head to head combat style of my daughter.  If someone becomes vaguely firm he will generally comply, if he still objects you know it's really important to him.

They're different socially too -  whereas my oldest always looks like she's having so much fun it seems to encourage children to gravitate to her, my youngest goes for sweet smiles and looking cute until someone befriends him.

My eldest voices her ideas about what and how they should play - my youngest is happy to join in with whatever someone else sets up.

I've discovered - society isn't anywhere near as keen on dark haired, older looking/sounding feisty girls as they are angelic looking cute boys, and sometimes I think it's really unfair.

As my eldest grew out of tiny babyhood, strangers would rarely speak to us in the supermarket - pretty normal I think.  But I would get comments like "You've got your hands full" as she vocally expressed her reluctance to sit and ride in the trolley, or the tutting and shaking of head as she dived under the clothes racks in M&S before shouting "NO!" when I asked her to come out.

I knew everyone assumed her much older than she was - but the problem was whilst her height and language skills were ahead,  her emotional development wasn't always up there, particularly if she was tired or unwell, or had had a long day. 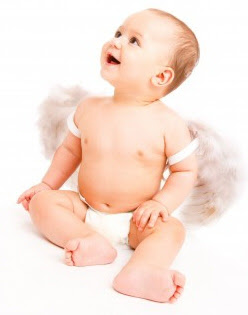 When my son was smaller people would constantly approach us when out and about - just to say "Oh my he's gorgeous, he's like a cherub!!", "Aren't you just beautiful"; literally every time we went anywhere.  It really hit me how shallow many people are..

I have actually had people say "It's so unfair that as a boy he has that gorgeous curly blonde hair, I bet his sister would kill for that, wouldn't she?" - with both of them stood right there.  Um well actually no at 6 she hadn't yet twigged how important these things apparently are...

My son quickly learnt that lowering his eyes and looking up whilst fluttering his lashes got him even more of an "Awwwwwwwwwww".  When he got frustrated he would dissolve into really sad sounding tears - which grabbed the sympathy vote all round every time. Displaying the same emotion in a different manner - yet it was so interesting to see how society preferred "distress" to what was perceived as "disobedience".

People would look sympathetically and say "poor poppet", or try and engage him to soothe him themselves; looking to me as if I must have done something heinous for him to be upset!  I would find myself explaining, he's fine really, just a little upset he can't pull all the glass jars off aisle 5 and chew the handle of the shopping trolley....

He could cause chaos in the middle of a play centre, yet would never ever be blamed even when at fault - he would simply flash them a look as if to say I never would, and whatever had happened assumed a misunderstanding.

People often suggested I was "too soft" on my eldest, yet should be softer with my second - despite the fact my parenting style was far more "mainstream" when my first was a toddler, and most consider the more empathic style I now try and use as "softer".  When I got fed up of the "angelic" comments and pointed out he could have his moments like all children - people would say "never!", "I don't believe it!".

When my son crawled/walked/talked (v cute baby voice) - strangers showered him with compliments as to "how clever" he was (and of course how sweet and cute)- in actual fact his development was completely in line with typically normal in most areas; did have a thing for numbers but they didn't base their judgement on something he was ahead with, it was the bog standard normal developmental steps from this cute dinky looking kid

In contrast my daughter did do everything at the earlier end of typical and her language/sentence structure, verbal reasoning etc was advanced, including pronunciation - no cute baby voice.  However as everyone assumed her older, milestones were perceived as "age appropriate" and nobody commented - they simply judged her when her emotional response was that of her age (and still do) as an older child acting unreasonably.

Even teachers and carers in the past forget her age - leading them to expect so much more of her than her peers/brother at the same age. 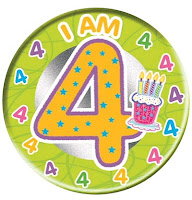 Society was so judgemental of my daughter I had her custom shirts made "I am 2/3/4" as applicable. At a play place one day my daughter, sporting her "I am 4" shirt went into a 5's and under play area.  I saw two mothers move protectively towards their toddlers and asked her why she wasn't in the older area, this was for under 5's.  My daughter looked confused and pointing at her shirt said: "my shirt says I am 4".

The mothers raised their eyebrows and went back to discussing between themselves how she was clearly older.

My son at 5 now goes into these zones and mothers tell their children to "move over and let the bigger boy in".

Yet what do we really want for our children as adults?  At what point does society deem it OK for women to become feisty?  Ever?  Do we really want our children to become compliant without question?  To always do as requested without challenge?  Do we hope that they will regain their "feistiness" at a later date, when we no longer are responsible?

Whilst I of course want my daughter to be an effective communicator, listen to the opinions and ideas of others and handle her frustrations productively - I also want her to challenge things when older, question, have her own opinions.  If she did everything I ask without question, what happens when I'm not the one "in command" any more?  When peers or boyfriends become more influential than mum, would she also follow them without question?  Would she be used to her opinion not counting?

Surely society needs a mix of characters to hope to function well?  Characteristics considered undesirable in young children can be valued in adulthood.

Next time you judge that child melting down on the floor - remember they may be much younger than you think, they may have a new sibling or something else that has rocked their world.  They could have autism or ADHD or something you can't see.  As the adage goes, you can't judge a book by its cover....
Posted by Analytical Armadillo IBCLC