New Initiative - Colour Coded Hats on Newborns - No Thanks!

I felt a bit like I'd stepped back in time this morning, when I read the following Tweet from King's in London: 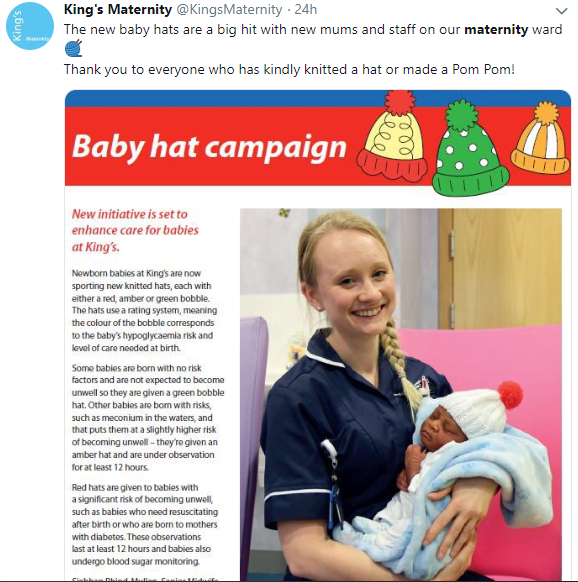 I really thought we were well and truly over the idea of "hatting up" term newborn babies? It seems not: 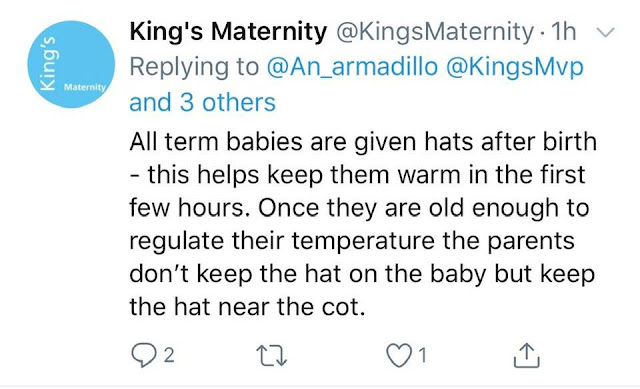 To be honest I'm even more confused, and the plan sounds more than a little flawed in a number of fronts:

Historically hats were used as way back in the 70s as they were thought to prevent a dip in newborn body temperature. Then we learnt about skin to skin:


"Skin Contact is a powerful vagal stimulant, through sensory stimuli such as touch, warmth, and odor, which among other effects releases maternal oxytocin (Uvnas-Moberg 1998; Winberg 2005). Oxytocin causes the skin temperature of the mother’s breast to rise, providing warmth to the infant (Uvnas-Moberg 1996). In a study of infrared thermography of the whole body during the first hour post birth, Christidis 2003 found that SSC was as effective as radiant warmers in preventing heat loss in healthy full-term infants."

Another 2018 paper "The effect of mother and newborn early skin-to-skin contact on initiation of breastfeeding, newborn temperature and duration of third stage of labor" - found separation hindered all areas and those kept close breastfed sooner, were warmer and their mothers had a more rapid third stage.

Focus shifted to "the undisturbed hour" after which babies don't need a hat. Even back in 2003 and the birth of my first, the midwives took the dinky hat I'd taken and placed it neatly back in my bag. Instead they tucked baby down my nightie and said after that, the ward was quite warm enough.

This seems logical right?  If newborns needed a hat to survive those first few hours, surely they would pop out with their own built in hoodie?


But alas no - I made a few calls and it seems hats are indeed back in fashion; in fact mums are expected to have early skin to skin WITH a hat, and the colour coded initiative may be rolled out on a wider scale.

As a mum and an IBCLC, I have to say this is horrifying to me.

The claim is the coloured hat enables them to identifying babies at risk of hypoglycemia (low blood sugars). All term babies apparently wear a hat for the first few hours to help maintain their temperature, including during skin to skin. This intervention it is proposed, reduces risks of separation of the dyad.

The reality is somewhat different.

First, the scent of her baby's head is extremely important to mum during skin to skin and continuing into the early days for early bonding. I'm going to bet anyone who has sniffed their newly born baby's head knows exactly what I'm talking about - mothers often describe the scent as "addictive", which in turn encourages her to plant lots of kisses, colonising her with any microbes on her baby, enabling the tailor made production of antibodies, which are passed back via colostrum.

The scent also prompts mum to release oxytocin (often called the bonding hormone), which in turn causes uterine contractions, forcing an instant constriction of the blood vessels that were running to the placenta. (Odent, 2013). Oxytocin is also important when it comes to breastfeeding, and as outlined above it generates heat for the baby - and so it all neatly comes full circle. 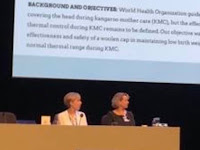 So, you'd think that if we're going to implement an intervention that has the potential to impact on all the above, plus hello, can you imagine skin to skin, half chewing on a pom pom instead of inhaling that delicious newborn scent? There must be some stonking evidence it helps.  A lot.  Right?

There's a paucity of studies on hat wearing at all, there's differences in terms of which hats are used (plastic, stockinette etc) and almost none in conjunction with skin to skin.

However a super amazing midwife, IBCLC friend of mine (thanks Marilyn!) sent me a 2018 study, exploring the preterm baby and knits - in a rural setting where low cost interventions can be hugely beneficial:


"The use of a woolen cap was safe but provided no advantages in maintaining LBWI in the normal thermal range while being in a KMC ward."

Again these babies are low birthweight and so far more challenged in terms of maintaining their own body temperature - even for them, there was no advantage to a hat.

Going back to the cochrane review above, we can see what did make a difference to hypoglycemia?  Yep, skin to skin.

When not in use the hat is kept "near the cot".

Now I love the NHS, I think midwives do a sterling job in the face of ridiculous demands - with most having developed the bladder capacity of a Shire horse. But seriously, now they have to ensure colour coded hats, that are likely to be rarely atop a head, stay with the right baby too?

Even under normal circumstances the hats wouldn't be needed, but anyone who has spent any time in summer in a typical NHS ward, knows colour coded fans may have been more appropriate. The air-con sucks, the windows barely open and the thought of a chunky knit hat becomes preposterous.

Surely a large acrylic colour coded magnetic disk that sticks to the side of the cot would be a far more reliable and environmentally friendly indicator, one that doesn't interfere with mums and babies?

9000 babies are born in King's hospitals each year - imagine if all hospitals roll this out, acrylic yarn isn't sustainable nor is the production of hats via volunteers.

The hat may in fact never even be worn - each baby gets a new hat for infection control reasons or it is burnt.

The knitter may be sat knitting in the grottiest conditions, smoking whilst knitting, coughing or sneezing on the item - that’s fine to put on a newborn head. Yet the moment the hat is officially allocated to a newborn, even if green and infection free - it must be burnt?

It also surely raises the question from vegans (or anyone else who chooses to avoid animals based products) of - is that hat real wool or acrylic?  (I asked and they think mainly synthetic, but they're donated so don't really know). 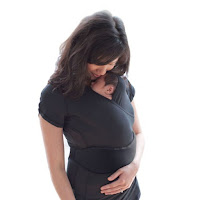 An alternative option which I think is at least worthy of consideration, is colour coded kangaroo care carriers.

These are carriers designed to protect baby's airways during skin to skin (if mum falls asleep) and hold baby close when mum wants to be mobile.

This facilitates best practice and could provide a mobile visual indicator.

The other benefit of carriers is they could further protect against newborn falls.

Paediatrics 2019 published "In-hospital Neonatal Falls: An Unintended Consequence of Efforts to Improve Breastfeeding".  The study claimed that in an effort to improve breastfeeding rates, rooming in rather than newborns in a nursery was putting babies at risk of falls.

Therefore surely the appropriate response is to identify and minimise risks?

When newborn nurseries were introduced, the problem of increased infection risk, mixing up babies or them being stolen, would all be higher than when babies weren't separated from their caregivers. As a result, tags and improved security systems followed. Hospitals have evaluated and adapted to visible risks based on separating babies from their primary caregivers.

Of course they didn't know then that separation was a bad idea for mothers and babies.

A 2011 paper however highlighed:

"The profound impact of maternal separation on the infant. We knew that this was stressful, but the current study suggests that this is major physiologic stressor for the infant."

They didn't know then that separating mother and infants who need intensive care support and were sent to different units, forcing increased separation - resulted in increased mortality.

They didn't know then that Mother-Child Separation Causes Neurobiological Vulnerability Into Adulthood or that scores and incidence of SAD were increased among children who were cared in the NICU and both were correlated with the duration of stay in the NICU.

These risks, whilst not as visible as dropping an infant, are far more common and wider reaching.

All events were associated with mothers falling asleep while feeding their infant, and all occurred between midnight and 6 am

A UK hospital explored their fall rate even further. There they noticed:


"similarities in many of the circumstances in which the falls occurred. These were that the mother had:


The most common scenario was that the mother had restricted mobility, due to having had a Caesarean section, felt sleepy, and fell asleep with the baby in her arms. The baby then fell from her arms and onto the floor.

These strategies brought about a marked reduction of baby falls and are now being established across all the maternity units across the trust.

Bedside cots were so in demand they had to source more!

Edited to add: A midwife friend raised an interesting theory this morning, that newborns (she felt) were at risk of becoming colder with a hat, particularly the babies with hair. Although wiped, their heads are still damp and a hat on a damp head can reduce temperature.  Another interesting theory to throw into the mix!

Update Nov 2019 as the scheme has been rolled out nationally.
Comments from Facebook readers:

This one really made me chuckle:
“ I just gave birth last week, and my baby was an amber hat--there was a picture of an amber hat stuck to the end of her cot. We never saw an actual hat 🙂”


Maybe hats themselves have secret magical properties only the NHS knows about? Why not an amber circle or square, why is hat imagery essential? 🤷‍♀️😂

“ YES! Thank you The Analytical Armadillo, I've seen this shared so many times and every time I was thinking If there's a hat you can't sniff them!
The idea that a green hatted baby is of lower concern, would set alarm bells off with me, because the nurses could completely unintentionally be a little complacent.
Baffles me how this gains support within hospital walls, even ten years ago, after the birth (home) of our first, the midwives said, oooh no hat unless it's chilly out!”

“ I’m not sure how I’d feel if my newborns had been made to wear red hats; marking them out as a concern? I think I’d probably feel like they were less than perfect or not as good as those in green hats in some way. This might sound a bit ridiculous but your hormones are all over the place and I was so worried about everything right at the start. It feels a bit dehumanising.”

“ My little guy would have been in a red hat (resuscitated, suspected neonatal sepsis, 5 days of antibiotics). It's hard enough for a mother on an extended stay in hospital with a sick newborn without the constant visual reminder.”

“ They're after them round us too, acrylic for 60 deg washing, sob. All that plasticky yarn on your beautiful new baby!”

“ I always thought the hat ridiculous, particularly because I didn’t want to take it home and then heard it would be destroyed for infection control. What waste, on so many fronts. Now that I’ve read this article (so well evidenced, well argued, as always), I’m even more incensed. It’s a silly implementation of an otherwise sensible need - to easily identify babies in need of extra care.”

“ I gave birth 5 months ago in July. My daughter was 9lb4. They put a hat on her and when i took it off to breastfeed (i couldnt see to get her to latch) i was told she had to wear it for 24 hours! Like something out of the 1970s.”