Many infant feeding practitioners have observed an exponential increase in the number of babies diagnosed with reflux and given hypoallergenic formula/and or reflux medication.  It's something I've blogged about before.

We have a situation whereby some babies are suffering with severe digestive issues, yet mums feel their concerns are not taken seriously (and I say mums intentionally, as many comment their concerns are taken more seriously should they take baby's dad with them or if he takes them).  In contrast others simply presented at A&E with an infant crying, were diagnosed immediately with "reflux" and given a host of medications and milks.

I've heard parents feel confident Omeprazole makes a huge difference to their babies, whilst others feel there is little to no change at all; or maybe some improvement but still symptomatic enough to be seeking further help.

It isn't without risk of side effects, therefore it's surely key to ensure that the medication is needed, effective and ultimately providing more benefit than risk - this decision will be unique to each baby and situation.

Omeprazole belongs to a class of drugs called "proton pump inhibitors" or PPI's.  Unlike say ranitidine which aims to neutralise the acid, omeprazole actively works to reduce it being produced in the first place.

The National Institute for Health and Care Excellence (NICE) & PPIs:


1.3 Pharmacological treatment of GORD
Consider a 4-week trial of a PPI or H2RA for those who are unable to tell you about their symptoms (for example, infants and young children, and those with a neurodisability associated with expressive communication difficulties) who have overt regurgitation with 1 or more of the following:
1.3.4 Assess the response to the 4-week trial of the PPI or H2RA, and consider referral to a specialist for possible endoscopy if the symptoms:

I decided to give NICE a tweet to ask for the studies that formed this guidance, and in the meantime scoured journals for studies.  I'll list them in date order, oldest first: 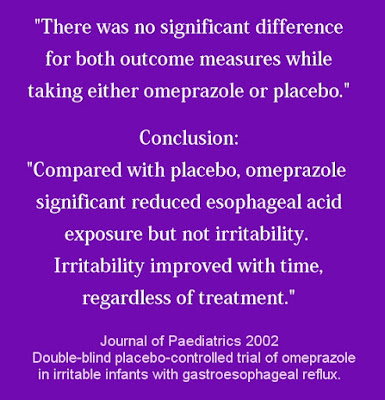 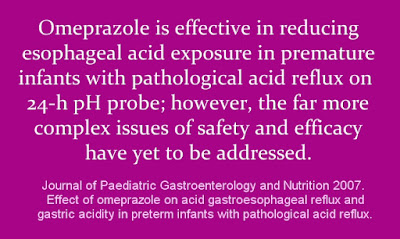 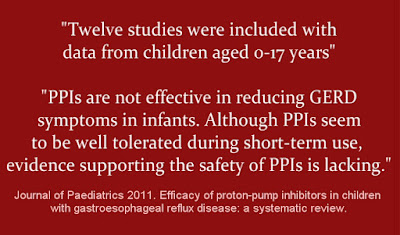 "Mildly elevated transaminase values in 7 patients and elevated fasting gastrin levels in 11 patients were present; in 6 of the 11, gastrin levels were 3 to 5.5 times the upper limit of normal."

"We found omeprazole to be highly effective in this group of patients with severe esophagitis [insert: irritation or inflammation of the oesophagus].  Omeprazole appears to be safe for short-term use, but further studies are needed to assess long-term safety because the significance of chronically elevated gastrin levels in children is unknown."

So in short, it worked to soothe an irritated or inflamed oesophagus, however it resulted in high gastrin levels, the impact of which is unknown and as such needs further investigation.  Gastrin is a hormone that is produced by ‘G’ cells in the lining of the stomach and upper small intestine; dring a meal, gastrin stimulates the stomach to release gastric acid. It also however acts as a disinfectant and kills most of the bacteria that enter the stomach with food.

I then decided to directly search for safety studies. The first thing I pulled up was a site called http://www.choosingwisely.org. Choosing Wisely is an initiative of the ABIM Foundation, which was created by the American Board of Internal Medicine (ABIM) in 1989 with a mission "to advance the core values of medical professionalism as a force to improve the quality of health care."

Their goal via Choosing Wisely,  is "advancing a national dialogue on avoiding wasteful or unnecessary medical tests, treatments and procedures".  They provide evidence based information and are supported by over 70 partners including the American Academy of Paediatrics and The American Academy of Family Physicians

One of their publications is entitled:

This was released in 2013, still stating a lack of effectiveness and lack of exploration of potential adverse effects.

NICE then kindly tweeted back telling me I could find the supporting evidence here. So off I went:

Under A.3.3 Analysis it says: " The literature search found no trials evaluate the effectiveness of PPIs in children and therefore there is not sufficient evidence to include these treatments in an economic model."

A.3.5 Conclusion: " Therefore, no comparison of the cost effectiveness of medical management and surgical management was possible for this guideline".

I then ran through the studies listed under "I.8 Effectiveness of medical management (H2RAs, PPIs and prokinetics) in GOR or GORD", picking out those that examined omeprazole and infants.

The first I found on the list was the study quoted in the purple box above, concluding irritability was not improved.

The second study they list is the study quoted in the pink box above, concluding safety had yet to be addressed.

I then got excited when I found a new study I hadn't yet found.


Efficacy and Safety of Once-Daily Esomeprazole for the Treatment of Gastroesophageal Reflux Disease in Neonatal Patients, AAP 2013

The similarities between omeprazole and esomeprazole outweigh the dissimilarities.  Some claim esomeprazole is even more effective, although this doesn't appear to be supported by evidence. 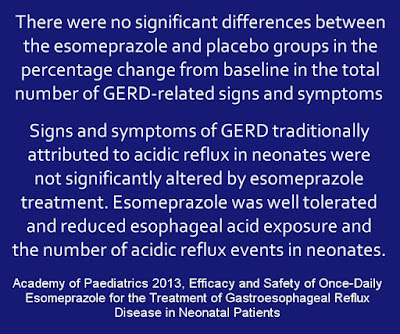 And does well tolerated mean no potential long-term adverse effects?

I scanned the rest of the papers and couldn't find any others relating to omeprazole and infants under 12 months.

So we have it seems, very little evidence demonstrating omeprazole is effectively resolving the symptoms parents seek help for, even if acid levels are reduced in a lab.

What about undesirable side effects? 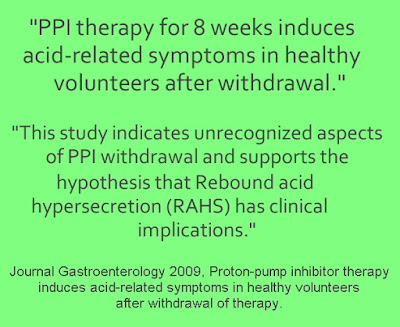 If we look at the bigger picture than just babies, a paper entitled "Outcomes of a medicationoptimisation review inpatients taking proton pumpinhibitors" for the QUIPP (Quality, Innovation, Productivity and Prevention) agenda reads:

"Proton pump inhibitors (PPIs) are one of the most commonly prescribed groups of drugs.1–4 Although PPIs are generally well tolerated, long-term use has been associated with adverse effects such as increased risk of bone fracture, 5–8 nutrient deficiency,9–11 Clostridium difficile infection, 12–15 and pneumonia.16–18 Because of these risks, the lowest effective dose of PPI should be used.19-21"

"Proton pump inhibitors may trigger the very symptoms that they are designed to treat because of compensatory mechanisms.23,24 Studies have shown that patients can suffer from rebound gastric acid hypersecretion following PPI withdrawal,25–27 which may make it difficult to maintain step down/off.28 In our experience, many healthcare professionals (HCPs) and patients are unaware of the risk of rebound symptoms and how best to manage them"

In particular problems observed include magnesium deficiency and B12 deficiency.  Furthermore these studies are of adults, with increased risks to the elderly - what about babies?

In 2013 a study linked PPIs to constriction of blood vessels.

There is concern ""If taken regularly, PPIs could lead to a variety of cardiovascular problems over time, including hypertension and a weakened heart.  In the paper, the scientists call for a broad, large-scale study to determine whether PPIs are dangerous."

I asked Dr. Flanders, a paediatrician in Canada for his thoughts about young infants:

He also suggested we check out an article from Canadian Family Physician 2013: 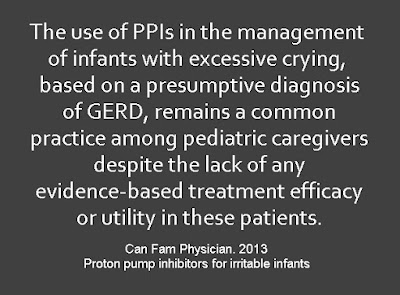 So what does all this mean?

It seems clear that PPIs should not be widely prescribed for most babies.

It means we also have a huge overlap of symptoms and so we need to be extremely thorough in assessments - because it's also clear from studies that many babies we think have "acid reflux", don't improve with medication that tests show is effectively working.

For example the NCT state:


"If your baby shows discomfort when feeding, such as arching away, refusing to feed and crying, it can be a sign of reflux. She may also frequently vomit or spit up (more than normal posseting, which is only about a teaspoon) and cough a lot, including at night, with no other sign of a cold.


Yet a baby with a feeding problem such as difficulty latching or using a teat well will arch, refuse to feed and cry.  They will often vomit if they gulp down air and can develop symptoms of reflux as a result.

They may feed little and often appearing to "comfort feed" as a result and may struggle with poor weight gain too.  Babies generally not transferring enough milk also wake often at night.

A shallow latch can also cause aspiration (Catherine Genna Watson, Sucking Skills) and thus a persistent cough and so none of the symptoms are exclusive to reflux.

Tesco baby club have an almost identical list, as do Babycentre - it's hardly surprising parents are visiting doctors in their droves.

The problem is, we risk losing the babies suffering GORD, those who are most at risk of significant complications from their reflux, in all the noise of misdiagnosis.

The babies who can suffer "An apparent life-threatening event" (ALTE), breathing difficulties, or experience damage to their oesophagus, experience recurrent aspiration pneumonias, persistent coughs and have a constant hoarse voice and acidic breath.

NICE guidance clearly states infants should have their feeding fully assessed before any medications are prescribed, yet we know this isn't happening.  Parents please push to see if someone can identify why your baby is refluxing, or why it's to such a degree they need medicating - rather than just symptom shooting.

Email ThisBlogThis!Share to TwitterShare to FacebookShare to Pinterest
Labels: Omeprazole