ALL infants need vitamin D supplement in the UK, anyone in the Northern hemisphere is deficient! As rickets reappear, so do generalised guidelines - and parents are often told that diet can't provide much vitamin D, instead it's all about sunshine and supplements.


"Vitamin D only occurs naturally in a few foods, such as oily fish and eggs. It is also added to some foods, such as fat spreads and breakfast cereals. The best source of vitamin D is summer sunlight on our skin.

It's important that young children still receive vitamin drops, even if they get out in the sun.  All babies and young children aged six months to five years should take a daily supplement containing vitamin D, in the form of vitamin drops. This helps them to meet the requirement set for this age group of 7-8.5 micrograms (mcg) of vitamin D per day.  Babies who are fed infant formula don't need vitamin drops if they are having 500ml (about a pint) of formula or more a day. This is because formula is already fortified with the vitamins they need.  If you are breastfeeding your baby and didn't take vitamin D supplements during your pregnancy, your health visitor may advise you to give your baby vitamin drops containing vitamin D from the age of one month."

So I thought it might be interesting to explore just how much D lurks in food and what contribution this could realistically make to intake.

First we need to talk briefly about the different types of vitamin D.  There are 6, but D2 and D3 are the types sold as supplements.  D3 is generally considered superior to D2 but again it gets more complicated because not all studies nor experts agree.


It's also not easy to tease things apart, as many studies use synthetic supplements, whilst in nature other compounds that work in synergy (if you want to get techy read more here) are also found.

Some studies that make the case against D2, highlight more is needed to generate the same circulating levels and it has a much shorter life after a single ingestion when studied over the next 28 days, however when it comes to infants they concede:


"Despite early evidence of differences in potency between the 2 vitamin D forms on a per weight basis, it must be highlighted that the widely practiced addition of vitamin D2 to milk in the United States and Europe in the 1930s served to successfully eradicate rickets as a significant health problem.  Additionally, fortification of milk with either vitamin D2 or vitamin D3 to this day has proven effective in the elimination of infantile rickets in North America.

To prevent infantile rickets, a minimal intake of 2.5 μg (100 IU) vitamin D/d in infants with little sun exposure was shown to be efficacious (10). Thus, despite potential differences in the dose equivalence of vitamin D2 and D3, it is likely that vitamin D2 is currently provided at a high enough dose per kg infant body weight to maintain adequate bone mineral metabolism." here

In short, in "real life" either appears to protect against rickets, in a lab D3 sometimes looks better on paper - particularly when discussing supplements..

They're often quotes as offering a little, but not much D.  But what if that depends on the egg?

An independent study showed that UK eggs today have 70% more vitamin D3 than in the 1980's.  Birds also need sunlight or food sources of D and the reduction in caged hens and increase in free range and organic who see daylight,  plus improvements to their diet mean things have changed.

How much?
Well one medium sized egg can now contain as much as two-thirds (66%) of the RDA for an adult according to EU labelling regs.

At the time several, including the director of the "British egg information service" (made me chuckle) called for this significant egg finding to drive industry use (Pinchen H., Roe M., Finglas P. M., Buttriss J., Grey J., Cryer A.2012)

So, the EU lists adult RDA of 5µg and the NHS states that 1-5 year olds have a requirement of 7-8.5µg.  If one egg provides 66% of adult RDA, each egg provides roughly 3.3µg.  I wouldn't call nearly 50% an insignificant contribution would you?

Fish can be a good source of D3.  This study though found farmed salmon contained 75% less than vitamin D than wild did.  As farmed fish is now the supermarket standard, you can see why some conclude it's not always easy to obtain D from food.

Furthermore cooking method impacts; baking salmon retains almost all the vitamin D, whilst frying in vegetable oil reduced the content by half.

What this paper also highlighted was that type of fish, diet, environment all impacted on vitamin D levels. You can see a list of the vitamin D value of fish here - although researchers concluded that the lists were out of date and new tests were needed. 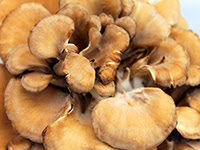 Mushrooms are a huge vitamin D secret mainly because they can be hacked (by exposing them to bright sunlight), to have a higher D level either during after picking, Maitake for example, when grown in the sun can boast as much as 28.1µg per 100g, with 1 cup serving providing 20µg of D.

This has been dismissed by some as it's D2, however along with what we learnt about about D2, a 2011 study specifically explored mushrooms.

Second that D4 had been found in mushrooms as early as 1937. Therefore they decided to test a range including oyster, portabella & shiitake and found all contained varying levels. Another study continued their research exploring the D4 and again found this linked to light exposure.

Leading them to conclude:

Some mushrooms like button, grow in the dark and so naturally have lower levels of vitamin D. However this study found a short short exposure to sunlight increased the vitamin D levels from 5µg to 374µg per 100 grams.

Some feel more data is needed about mushrooms however because of one particular study in which researchers gave "sun-treated" or untreated mushrooms to a group of adults.  They found vitamin D2 supplementation via mushrooms didn't help overall, as the participant's vitamin D3 levels reduced to compensate - thus giving no-overall effect.  The massive flaw in this study as I see it is that these were healthy adults who started with totally normal serum levels, and maintained totally normal levels.  Yet it appears well accepted when giving a D supplement that the blood level does not keep increasing even with ongoing supplementation. It rises into the ideal range and then it stabilises. Vitamin D is consumed by the body, it is utilised and then inactivated (Dr David Grimes, Consultant physician and gastroenterologist) 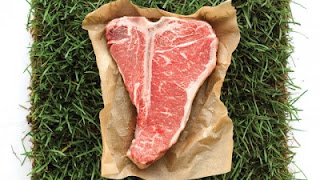 You can see a table here of the different values recorded in meats in different studies.  As you can see beef offal packs a huge punch.

Our shift in what meats we choose to eat has also likely reduced our vitamin D intake:

This review finds numerous studies linking fat and vitamin D and says it was:


"significantly associated with the fat content of whole cuts, and in the cuts 8 to 10 times more vitamin D-3 and 2 to 3 times more 25(OH)-D-3 was found in lard and intramuscular fat than in the lean parts."

Fatty whole joints slow cooked used to be pretty standard as they were cheap (now often called "traditional cuts").  Many locally recall their parents home rendering lard and "dripping" which was even eaten on bread for lunch.

Then came the fat phobic/convenience era and lean steaks with the fat removed that could be cooked in minutes increased in popularity.  Use a Griddle so you make sure you strain as much of the evil arterty clogger away.   Liver was left behind, the overcooked dried offerings presented as school dinners etched on our brains, mingled with a fear of overdosing on vitamin A.  Lard and tallow were replaced with vegetable and sunflower oils and without realising we also waved goodbye to fat soluble vitamin D.

The problem with the convenience era, is that animals don't grow 33 leg chops and chickens don't have 20 breasts.  We therefore need many more animals to meet demand than when "nose to tail eating", that is consuming as much of the animal as possible rather than selecting choice cuts.

The trouble is if nobody wants a huge chunk of the animal, the parts we do want become more in demand - this drives down price and producers need to find cheaper and more economical ways of raising animals.

Turns out raising animals in substandard conditions leads to substandard meat.  What the animal is fed impacts on what nutrients it provides, to quite a large degree.  It also turns out that animals, like humans need sunlight themselves to produce adequate quantities of vitamin D, or they need their feed supplementing too.