Recently there seems to have been lots of posts on Facebook complaining about the bottle symbol being used to identify something baby related.  From phone apps to feeding rooms, children's TV shows to T shirts it's everywhere.

Without fail the comments that follow include things along the lines of:

"I don't see the problem, there are bigger things to worry about"
"It could be expressed breastmilk in the bottle, what's the big deal?"
"It's no big deal, they can hardly use a a giant breast!"
"Not sure they could pictures of boobs up in department stores..."

Google "Nursing a baby" and the information relates to breastfeeding.  I haven't heard a non breastfeeding mum use the term "nursing" to mean bottle feeding.  It can mean cuddling/holding in some areas, but I'm pretty sure this isn't a designated cuddling room!

So even when advertising a breastfeeding room, we have a picture of a bottle?

I don't get it.  What is a bottle but a replica of a breast, nipple and all?  (although we Brits call them teats not nipples, as that would be a bit too breast like thank you very much!)

So if we can use an icon of a bottle and it not cause offense, is an icon of the real thing really that "out there"?  Let's take a look: 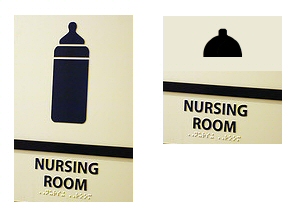 Gosh yes, see how offensive that is?

I can see why that plastic container bit at the bottom makes it so much more acceptable that a real breast icon, the round fullness of the breast positively perverse compared to the tall sleek container!

Oh but wait we can't use a real breast anyway, because that might make bottle feeding mums feel guilty right?  You can put breastmilk in a bottle but not vice versa so the first is more inclusive?  Because we often see mums hiding their bottles under fancy covers or feeding shut away in dirty rooms with nappy bins...

Perhaps we should introduce the viagra logo as the international symbol for sex so as not to offend those who can't "perform"?

I contacted John Lewis last week, and asked if the bottle picture on the baby feeding room meant the room was just for bottle feeders.  Their reply:


"Although a bottle is used as it is a universally understood symbol for baby feeding, we encourage breastfeeding in all of our stores."

Is it really universal?  do Norway, Sweden etc use bottles to symbolise a baby feeding room?

The very fact John Lewis feel a bottle is the universal symbol for feeding in itself speaks volumes about the culture we live in.

Then consider we need a special room for mums to go and do it in! If they're lucky we even give them little cubicles so everyone is spared the sight of a human infant feeding:

I don't actually think the logo should be a breast, there is an International breastfeeding symbol shown here on the right which I think is pretty inoffensive all round:

But ultimately the point is that it's only in a bottle feeding culture the above would even be debated or relevant.  As individual stand alone symbols, it seems reasonable to suggest it's not a big deal, but add together all the little things and soon we have a big thing.

Think of it like this - take a child being confrontational.  As one stand alone incident, it's not be a huge deal if your child typically is co-operative and communicates well.  But if the same child was confrontational every time you spoke to him - it becomes a big deal.

The culmination of all the ways bottle feeding is drip fed as normal within our society, is significant, it does matter.  In order to effectively support women who want to breastfeed to do so, we have to create a breastfeeding culture - a society where feeding human infants milk of their own species is normal, not special, best or optimal.  Breastfeeding advocates realised this in the early eighties as this fascinating piece highlights.

It's illogical to say these things don't matter, we need to just focus on helping mothers succeed - because societal norms are ultimately key to this success

If you don't want Health Professionals undermining breastfeeding by suggesting bottles at every turn, if you want them to understand breastfeeding and know how to resolve problems - we need to create a breastfeeding culture.

If you want research and media to hold breastfeeding as the normal way to feed a baby, with alternatives compared to this norm rather than vice versa - we need to create a breastfeeding culture.

Still not convinced?  Here is an excerpt from an email I received recently from an amazing young mum trying to establish breastfeeding:


"I went to see my GP because of the pain and she started ranting about how disgusting it was for new mums to feel so guilty they HAD to breastfeed, that there was too much pressure. I said I didn't want to stop I wanted to feed him myself because I knew it was best but I just wanted to know why it hurt so much. She said that he'd had the best stuff and I shouldn't feel bad if I wanted to stop now. Might be because I'm a young mum but she was no help at all."

I wish I was surprised, but look at the quality of information provided by celebrity Doctors and pretty soon you might find yourself overwhelmed by the urge to introduce your head to the nearest hard surface.

We simply can't change this within the current culture, we can't expect quality advice, for people to accept and treat breastfeeding as the norm - if those same people ultimately perceive bottle feeding as the "normal"way to feed an infant - the two clearly are simply not compatible.

UPDATE: John Lewis have been in touch to say they are in the process of updating all their store feeding room logos to be an image of a baby, rather than a feeding related icon!