Ask the general public how we can prevent pertussis, often called whooping cough in babies, and the vast majority will answer we "vaccinate them".

Just this month when a Netmums user posted a clip of her baby gasping for breath - the comments were for the most part all about the importance of vaccination.

I'd like to clarify now, the focus of this post is not infant vaccinations; the subject that always causes a trench like divide.  I have to briefly touch on them, in order for the piece to make sense - but the key messages I want to convey are:


The commentary with the video footage suggested that baby had received his first shot as scheduled,  which is estimated to be around 55-70% effective - but three doses are needed to reach an average quoted protection rate of around 80%.  Immunity to whooping cough wanes fairly rapidly and so boosters are given to "top up" antibody levels..

The earliest age a baby can obtain any protection via their own vaccination is 2 months.

One of the problems we face with whooping cough, and something we need to understand when discussing tactics to protect the young - is that unlike with other diseases, herd immunity from vaccinations alone may not be a viable strategy. Whereas sometimes the plan to vaccinate everyone around the most vulnerable group can prevent spread to newborns, this is very difficult to achieve with pertussis 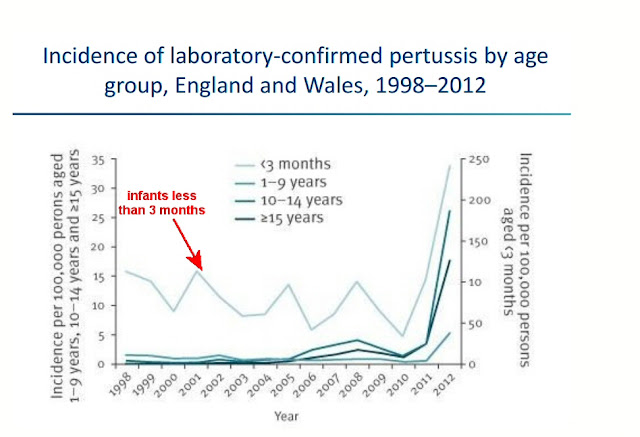 As we can see on this slide - in the UK whilst cases in those older than a year old are reported to be incredibly low at points, there is still a significant number in those less than 3 months. Whilst the level falls somewhat, that age range is much more susceptible to the spikes of epidemics.

Regardless of the ins and outs of why, during the 10 year period 2001-2011, 85% of deaths due to pertussis in infants occurred in infants who were too young to be protected by vaccination.

The CDC put this figure even higher at around 92% and the Center for Infectious Disease Research and Policy (CIDRAP) agree saying:


"With pertussis rates increasing over the past 25 years, the mortality burden has shifted to babies younger than 6 months who are too young to be vaccinated".


So we know that when it comes to infant pertussis, we have to think beyond infant vaccination - in fact we have to realise that all the noise about them, for babies who can't have them yet anyway -  may be distracting us from exploring what could actually help.

Many of mothering age today were vaccinated against pertussis, but haven't had a booster since childhood - some may have been exposed to the wild circulating strains and have high levels of antibodies, but others may not.  Indeed studies have found very variable rates of antibody levels in mums tested.

So, in an attempt to overcome this variability, and try and ensure newborns received enough antibodies, and in response to significantly increased rates of disease in 2012, immunising mothers in every pregnancy was introduced in some countries, including America and the UK.  Stimulating an immune reaction in mum, means increased antibodies are passed to baby that are thought to last for the first 8 weeks.

Since implementation, a review examining outcome found  this to be up to 90% effective in protecting newborns - although it should be noted the review included only 58 cases and 55 control infants.  Some however predict this strategy may only be fully effective for the first month of life.  Others note the high antibody levels stimulated via vaccination, immediately prior to birth should result in large amounts of antibodies that take longer to wane.

All this means that even if we run with the absolutely best estimate of 90%, we have 10% still vulnerable. Plus we have the roughly 20% who are still not covered despite receiving their full set of vaccinations.  And all that's assuming 100% uptake of the antenatal and postnatal vaccinations.


Therefore you would think, or at least I would, that if there was something else we could do as well to protect babies, we would all know about that too?

Doctors and midwives would surely share all the information we have on keeping the most vulnerable safe, right?

Like Harry Potter's Voldermort, nobody seems to want to mention breastmilk as a public health measure against whooping cough.  Of course providing breast milk isn't as straightforward as giving a shot, but how many parents or even doctors are fully aware of the impact infant feeding has on pertussis rates and outcome?
Some even dismiss breastmilk as being ineffective in protecting babies against pertussis, so let's take a look.

Before we go any further we need to have a quick recap of antibodies.  It's a bit dull so I will keep it brief, but it's pretty important to understand why breastmilk is so important:


In 1989 a study found breastmilk contained "significant titres of specific IgG and IgA antibodies to pertussis"(along with flu, strep and meningitis)

A study that tested women 10 years post vaccination in areas with circulating strains,  found 87% produced pertussis antibodies in their colostrum.

If mums are producing antibodies, they're also in their colostrum and milk; so the next question has to be, do they serve a purpose?  i.e. can they help protect a baby against pertussis.

There are ample studies exploring the disease- preventing role of the antibodies in breastmilk, and some that have specifically explored the role of whooping cough antibodies.

A 1985 review concluded that maternal antibody transfer through colostrum may indeed be a method of protecting human infants from pertussis during the first few months of life.  They explored amongst other things a paper by Dowham et al, who hypothesised that as infants inhale milk feeds and regurgitate them through the nose, the antibodies collecting in the respiratory tract (remember those sticky IgA antibodies we talked about?) might protect against severe respiratory infection.

A 2010 study found colostrum samples showed 100% average transfer rate of IgG antibodies, and variable levels of IgA antibodies, depending on the degree of exposure that each mother has had to several antigens. Overall high antibodies levels demonstrated a high rate of protection, whilst lower levels weren't as reliable.

"Our data demonstrated the effectiveness of anti-pertussis antibodies in bacterial pathogenesis neutralization, emphasizing the importance of placental transfer and breast-feeding in protecting infants against respiratory infections caused by Bordetella pertussis."

So what about mums vaccinated during pregnancy?

Well, researchers have found that vaccinating mum during pregnancy, does as proposed increase the levels of both IgG and IgA pertussis antibodies in her breastmilk; what's more, unlike the more rapidly waning antibodies passed via the placenta,  they're not short lived:


"Interestingly, antenatal maternal vaccination appears to positively influence the production of specific antibodies transferred to the infant via breast milk for at least 5–6 months postpartum [71–73]"

But it gets even more interesting when talking about breastmilk and pertussis than just antibodies.

One study found that "human milk, unlike cow's, could reduce the viability of pertussis" - however they noted that "This antibacterial activity was not due to the presence of antibiotics or antibodies in the human milk".

The 2010 study I mentioned  reached similar conclusions when they tested a colostrum sample from a woman with immunodeficiency.  Although she didn't produce IgA antibodies at all, her colostrum still protected 45% of mice against pertussis.  Similarly purified IgG antibodies protected only 65% of the mice, leaving researchers to conclude:

Doesn't that mean if we add breastmilk with antibodies, to the "unknown factors in breastmilk that appear to neutralise bacteria", we have pretty hefty protection?

Researchers who published in the the Journal of Vaccines & Vaccination in 2015 certainly seem to think so.
Their paper reads:


"The dawn of maternal vaccination is an important milestone in breastmilk immunity. Breastmilk per se has immunopotential that protects the infant from important childhood diseases both in the immediate neonatal period and in the long term. Its immune nutritive attributes confer this exclusive early nourishment a cutting edge in defence that no other human nutrient can yet offer."

They go on to review evidence that breastmilk is important for the maturing immune system and its potential to differentiate harmless and pathogenic microbes, as well as its antimicrobial action.

"The immunological components in breastmilk are many. There are diverse and multifunctional. It is proposed that vaccines that are given to the mother can pass through breastmilk and potentially utilise these breastmilk components to augment action and protection."

They conclude that more antenatal clinics should routinely practise the delivery of this multi-pronged system as "primary disease prevention is achieved both by breastfeeding and by vaccination. "


Ultimately anyone who believes it's important to try and protect tiny babies from pertussis, surely has to acknowledge that feeding method has a role to play.  However uncomfortable that might make us feel.

Why are midwives not telling parents at their antenatal sessions?  I would surmise that most (and certainly those I checked in with) don't know - nobody bothered to pass on these facts.  Are we so worried about "guilting women" as some doctors claim, that we feel they can't handle the research?

Even in educational videos about preventing pertussis produced by children's hospitals such as this which has had over 126,000 views, breastfeeding is never even mentioned.

What we do know is that pertussis in unpredictable, is cyclic in nature and epidemics can occur.  We also have to acknowledge that achieving very high rates of maternal vaccination may be difficult to achieve, and that any longer-term implications of this are still yet to be fully understood.  As breastfeeding appears to offer some level of protection with low levels or even without antibodies present, all parents should receive this information - whether they plan to vaccinate themselves and their baby or not.

Therefore the question we have to ask is can we truly make informed choices about how we feed our infants, without transparency about a disease like pertussis?